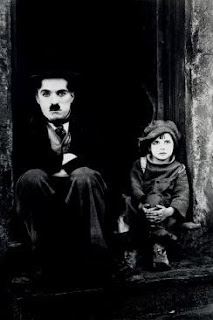 A woman gives birth to an unwanted baby and leaves it in some stranger's car. By coincidence, the Tramp finds the baby and after a few unsuccessful attempts to get rid of it, decides to adopt it. 5 years later the woman became a rich actress and started to search for her child. The kid on the other hand became the Tramp's partner: he would break the windows of houses, while the Tramp would "accidentally" show up carrying a mirror and fix it. Thus they are both chased by a police officer while the orphanage tries to forcefully take the kid and bring it to a more suitable environment. A man reports the kid to the mother who also invites the Tramp to her house.

Charlie Chaplin's first feature length film (it's running time is about 60 minutes), "The Kid" is quite famous for bravely mixing social criticism, drama and comedy, even though it's quite sentimental and overstretched. Chaplin shot "The Kid" after the death of his baby, which is why some jokes and gags are terribly bitter and sad; many things are exaggerated and almost pathetic, like the sequence where the workers are forcefully bringing the kid to the orphanage (they use force to stop the Tramp while one of them even lifelessly pushes the kid into the truck, causing him to cry uncontrollably), yet Chaplin's emotions are so honest that it's hard not to like them, especially in one of the most touching moments of the silent era, the one in which the Tramp is reunited with the kid and kisses him without pardon, without fear, without acting. "The Kid" is an unusual film that's almost more suitable to be a drama than a comedy thanks to it's honest tone. Chaplin is once again in top notch shape in slapstick segments, but also shows real care in directing - many scenes seem so simple yet were obviously really difficult to film. Despite the little Jackie Cooper, who became the first child star. the biggest virtues are also the understanding for the lower class and emotions that make them as real people.

For an essay on THE KID go to:http://www.american.edu/academic.depts/soc/kid.html

Free Screening of THE KID scheduled for January 15,2009 @ the ARLINGTON PUBLIC LIBRARY--Arlington, Virginia