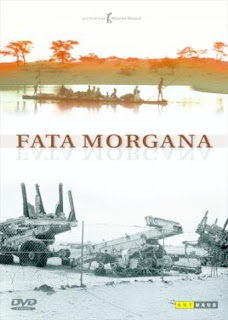 The movie displays images of the desert and nature across Algeria, Mali, the Ivory Coast and Kenya, while the narrator recites the Mayan creation myth. In the first chapter, the Creation, it shows the desert and empty landscapes. In the second, rudimentary villages in the desert and it's inhabitants, dead cattle and abandoned vehicles. In the third, The Golden Age, it shows a woman playing on a piano and a man holding a turtle. It ends with a shot of a mirage.

One of the strangest cult movies ever, surreal pseudo-documentary "Fata Morgana" is probably the most demanding Werner Herzog film that is suitable only for the viewers with extreme patience and concentration abilities. Everyone knows some basic rules about what a film should have: a plot, characters and a clear message. In that respect, this is a real anti-movie; an experimental film without a story, without (human) characters and without a clear message, except what can be understood subconsciously. But maybe therein lies the beauty: that the world has some essence that is there even in the emptiness. When Herzog pans with his camera across some desert dunes or mountains or the sky, it's just that: just a picture card, but there is still something hypnotic about it that makes you wonder how wondrous and magical our world is, but we hardly even notice it. Not since Weerasethakul has there been an author with such an eye for nature. It's as if Herzog asks: "When there's a chase across the valley, then it's interesting, isn't it? But what if we just show the valley alone, without anything else?" But, sadly, he didn't stay faithful to that concept when he introduced some human characters that seem unnecessary and ruin the 'vacuum charge' of the film (a woman playing a piano, a man holding a lizard, some Algerian child holding a cat, a diver holding a turtle). A humanless film would have been so much more to the core what the film started to be. For some boring, for some hypnotic, "Fata Morgana" undeniably stands out either way.