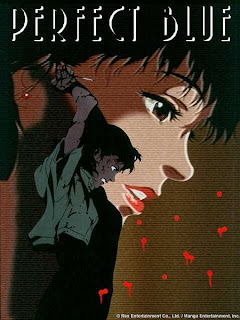 After a movie about super-heroes, a bunch of hooligans go to a concert of singer Mima and cause chaos. Mima calms them down and announces she will leave her singing group - where Rei and Yukiko are also part of the team - to become an actress. Her first performance brougght her only a few seconds of screen time, but she gets a big role in a thriller series. Yet, then strange things start to occur: she finds a diary on the internet that gives a lot of information about her private life, she finds a double while many members of her crew and a photographer get murdered. Mima discovers that her double is Romi, her agent, so she puts her to an asylum after a duel.

Disturbing, award winning anime "Perfect Blue" is a mysterious thriller inspired by Hitchcock that knits a fine web of intruige and suspense up until the banal end. Director Satoshi Kon allows the animation with ecstatic physghionomy to emphasize the frightening tone, but he isn't especially original in the lax story and the relationships of the charachters. His best trick is that some suspensful scene suddenly turns out to be just a sequence from the TV thriller series where the heroine Mima stars in, yet he didn't manage to get rid of a few confusing, loose ends that remain after the finale, since they don't fit no matter how surreal the movie is supposed to be. Some complained that the scene where Mimi is acting that she is raped in the series is too terrifying, but there are also much more disturbing examples than that in some other adult animes. For a thriller, Kon proved to be a talented director, yet he showed even more of that talent in his following, more gentler dramatic movies, like the excellent "Millenium Actress".

Don't know if you are familliar with the Italian Giallo films, but this film had everything to be basically an animated gialli.

Except for Argento, I have to admit I'm not that familiar with it. Interesting to hear a comparison between Giallo and this anime.

Good review! The film is definitely a real eye opener into an idol switching careers in the entertainment industry and how some people can’t tell the difference between reality and fantasy.

Would you also mind reading my take on the film and commenting? There are some things I am confused about and need answers too! Plus to me, it seems like a reflection of the industry! http://nynyonlinex.wordpress.com/2012/12/05/perfect-blue/