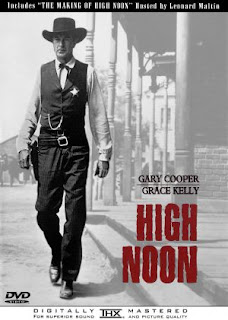 A Wild West town on Sunday. Marshall Will Kane is marrying Amy and is thus about to quit his job. But just then three cowboys appear and wait at the railway station for Frank Miller, a notorious outlaw who was released from jail and now wants to take revenge on Will for arresting him. At first, Will and Amy flee from the town in a carriage, but then he changes his mind and decides to stay and wait for him. Yet, nobody in the town is willing to help him, not even Amy. He speaks with his former girlfriend Ramirez and prepares for the duel at noon all alone. Still, he manages to shoot the 4 outlaws and then leaves the town in disgust.

A real evergreen and a classic, "High Noon" is a strong, focused and wonderfully simple allegory about loyalty and "true friends in trouble", themes so universal that viewers all around the world can identify with them, which is why that part of the film still seems most memorable despite all those great shot compositions and tight atmosphere. Fred Zinnemann brilliantly directed the whole movie, even though it seems rather repetitive after a while since it just features variations of the same situation in which Marshall Will tries to find allies who will help him in the duel with the evil outlaw gang, but nobody wants to help him, so he is left alone and has to rely only on himself. As the old saying goes, even period movies are a document of their time, and it's noticeable here: Carl Foreman wrote the screenplay as a sly semi-allegory on McCarthyism and blacklisting. Namely, Will is persecuted by that what he stands for and is urged to run away from the outlaw gang, yet decides to stay and face the consequences, even though his friends all abandon him and he is torn by that what he believes in. Maybe it is a little bit of a stretch, yet back in 1952 the parallels were more than eerie. It's also interesting to note that the movie was shot in real time and that Mexican actress Katy Jurado achieved a great little role as Will's former girlfriend Ramirez. The movie several awards, including ones for Gary Cooper's charismatic performance.