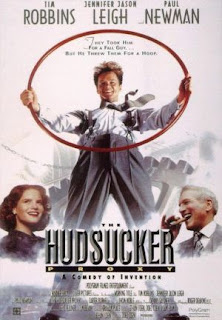 New York, late 1 9 5 0s. The president of Hudsucker Industries, Mr. Waring Hudsucker, commits suicide by jumping through a window on top of his own building. The board of directors, headed by the ruthless Sindey J. Mussburger, place the naive Norville Barnes, who just came from a province, for the new president, hoping he will ruin the company with his bad leadership, so that they can buy their stocks cheaply. But Norville proves to be more capable than they expected when he invents the Hula Hoop and draws the attention of journalist Amy who decides to spy on him, but that is discovered by Sidney who fires him. Still, when Norville jumps through the window, he is saved by the angel of Hudsucker, and thus takes over the company.

With this extremely tame, gentle and correct comedy did Joel and Ethan Coen craft their most expensive film to date with a budget of 25 million $, but when it only grossed 3 million $ at the box office they decided never to invest so much into their nostalgic odes to golden Hollywood films. Coens somehow always strived towards the comical, but when they made "Hudsucker Proxy", a pure comedy, they somehow made it too artificial to be funny: the only truly laugh-out-loud scene is the one at the start where Mr. Hudsucker (Durning) is falling from the top of his very, very tall building, looking down and "waving" the people at the bottom to "move away" from the spot he will fall on, but as a whole, even some of Coen's dramas were funnier than this film. The only way to understand the brilliance is to be patient and admire the Coen's top notch visual style, that turns this into an excellent fantasy and satire on Capitalism, equipped with their 'overhuman' authorship, while their gentle homage to classic films like "Christmas in July", "Mr. Deeds Goes to Town" and especially "His Girl Friday" since Jennifer Jason Leigh is imitating Russell's madly fast talking, has some neat charm and even gives a little dose of emotions in their otherwise cold worlds. Tim Robbins is great as the naive, but lovable hero Norville, Paul Newman is also amazing, while the meticulous set design and a few virtuoso directed scenes ensures the story can be rewatched several times. The film was nominated for a Golden Palm in Cannes.