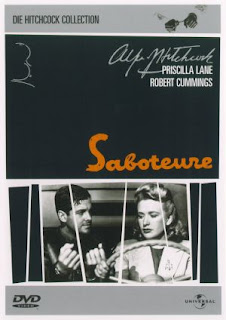 Los Angeles, World War II. A fire breaks out in a plane factory: a suspicious worker there, Fry, gives Barry Kane a fire extinguisher with gasoline in it, who then, unknowing, gives it to his friend Mason, who dies in the flame. Since the police suspects Barry, he flees to Central Valley in order to find Fry, but only discovers he was working for the rich Topin. Barry gets arrested by the police, but escapes and takes a long journey with the blond Patricia. In Soda City, an abandoned town, Barry pretends to be one of the saboteurs in order to gain the trust of the organization there. Tobin discovers him at the party, but he again manages to escape. After Tobin's men arrange an explosion of a navy ship in New York, Barry confronts Fry at the top of the Statue of Liberty. Fry falls down and dies.

"Saboteur", a variation of Hitchcock's own earlier film "Sabotage", is today a rather dated achievement from the master of suspense: the stiff screenplay exploits the clichees of the 'innocent man on the run' and gives the film a banal, goofy and silly undertone, while Robert Cummings is somehow miscast in the title role, which even Hitchcock himself admitted, and on top of everything there are too many unconvincing moments. Ironically, the small supporting roles of bizarre characters the two protagonists meet on their run are more interesting than the main plot itself: they include a woman with a beard, Siamese twins, a truck driver who is so bored with his job he can't wait for some "exciting" catastrophe to happen and especially the unusual bad guys who are not portrayed as the avarage 'run-of-the-mill' bad guys, but actually as decent, kind, even respectable gentlemen with families who just have a different ideology, which makes them even more scarier. The crucial scene, in which Topin gives Barry his rant about the "moron million" displaying his sympathy for totalitarian regimes never mentions the term 'Nazi' or 'Fascist', but everything is spelled out, especially when Barry replies he met numerous kinds of people on his way who will never accept evil. Also, the finale on the Statue of Liberty, filmed entirly without music, is even today pure example of brilliance. "Saboteur" maybe a "Hitchcock light", but it still has enough virtues.