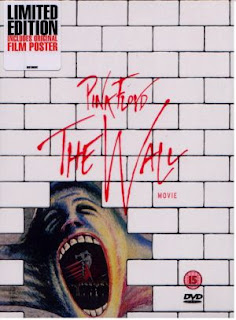 Pink is a man sitting in a hotel room. He is haunted by disturbing memories of World War II when he was a boy and lost his dad. He put a bullet on the raildroad and was ridiculed by his teacher for writting a poem in school. His mother was always very protective towards him. He gets married and becomes a rock star, but he always has a feeling he is missing something in his life, dreaming of a wall around him. He shaves his whole body and falls in a coma, upon which his manager calls the doctors. He imagines he became a Fascist dictator and that people all over the country are running wild. On a trial, his wall breaks apart.

Just like Russell's "Tommy", Alan Parker's "Pink Floyd The Wall" is also a completely abstract rock opera almost without any kind of story or dialogue (except singing), transforming into a purely experimental film so suggestive that anyone can either say it's a brilliant, brave piece of hermetic allegory about the trauma of war, hate, madness and a hero who is hiding himself behind a symbolic wall from the real world or pure junk with pointless scenes and symbols where the surreal narration nobody can follow is just there to hide the fact the whole film doesn't have anything to say and acts just as a one long music video for Pink Floyd's songs. If one would try hard enough, one could find basis for both assumptions. Filled with bizarre images - an animated sequence where a white dowe transforms into a black eagle who brings death to a gloomy town; children wearing scary masks in school and getting transproted with the help of an assembly line to a machine that transforms and suits them into various jobs until they rebel against the system; an animated scene where two grotesque flowers "kiss" and transform into monsters; worms; Pink looking like a decomposing corpse until he breaks his flesh away and revelas his new self; a pseudo Fascist rally - and the charismatic performance by Bob Geldolf as the unstable hero, who says only one line during the course of the whole film (if we disregard when he is singing lyrics), this cult film demands a lot from the audience but doesn't reward in a completely satisfying way like some others did, yet it's messages, ideas, wild imagination, terrifying imagery and originality have their merits and one has to learn more about Floyd's songs in order to understand it better.

Overrated is a term that is frequently used and misused, if you want to be pedantic art is subjective and all that...BUT (in my opinion) if ever a band was 'overrated' then that band is Pink Floyd and if ever a film is overrated then it's 'The Wall', I actually have all of Floyd's albums, I've seen them live and I've spent years trying to 'get them' but I just find this film pretentitious, self indulgent, boring and basically overrated, Dave Gilmour has described this film as 'rather a whinge', I think he may be right too.