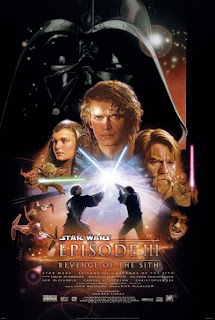 The Galaxy is caught in the midst of the Clone Wars. Anakin Skywalker and Obi-Wan Kenobi manage to save Chancellor Palpatine from the evil Seperatist, but he turns out to be their leader and manages to attract Annakin to the dark side. In a battle, Obi-Wan wounds Anakin and leaves him mutilated, but he gets reassembled as Darth Vader and brings the Galaxy into an evil dictatorship empire led by Palpatine. Amidala gives birth to Luke and Lea, who are hidden from Darth.

A lot of heated debate and hype surrounded "The Revenge of the Sith", the last prequel of "Star Wars": while some critics even called it a brilliant tragedy and the best prequel ever, in the end it doesn't distinguish itself that much from the previous efforts, "Clones" and "Phantom". Although George Lucas finally brought in a greater dose of ambition in the story, he once again fell into the trap to put too much special effects, like a peacock decorating himself with overstuffed feathers, hence the story sometimes seems like a cartoon. The first half is weak and ballasted with too much action, thus the best parts are precisely the "grown up" ones, like when Amidala says to Anakin that she is pregnant. The second half is much better because Anakin's transformation to the evil Darth Vader is shown with a gradation, but the dialogues, characters and events are again bland, stiff, dry and colorless, whereas Obi-Wan in this edition is just a shadow of the original, while Lucas overlooked a few illogical things, like the finale where after the victory, Obi-Wan just leaves the wounded Anakin lying there (!), slowly getting burned by lava! Pretty dishonorable! He should have either helped him or get rid of his misery. Not to mention that there were simply not enough plausible reasons given *why* Anakin would join the dark side: after losing everything, he would simply abandon either side, the Jedi and the Sith. It seems that these "Star Wars" prequels should have not been made because they could have just left everything mysterious and unanswered: their stiffness could have been only saved by a few quirky ideas, humor or a few emotions for grown up audience. Overall, even in this edition, all these three prequel stories warrant only one movie, since they are very overstretched. The expressionistic battle between the future dictator Palpatine and Yoda, in which the Galactic Senate is symbolically destroyed, is the only sequence that justifies the existence of this prequel.