The Girl and the Oak 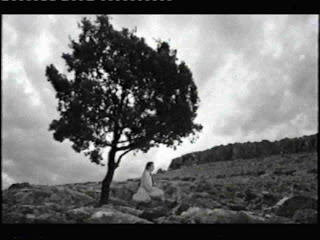 Dalmatian zagora. A woman carrying water from a source falls from exhaustion and dies under a oak tree. Her little daughter Smilja is left an orphan and is thus adopted by a man and his little son Josip. Smilja secretly brings water to the oak and her stepfather mistakenly thinks it was taken by Josip whom he punishes. Some 20 years later Smilja is in love with Ivan, but her stepbrother Josip is also attracted to her. In order to make some money, her stepfather sends her begging in a nearby village, but Ivan persuades her to leave such humiliating task and go observe a cave with him. The jealous Josip kills Ivan and throws his body in a lake, and then meets Smilja in a meadow and rapes her. She secludes herself from the world, while Ivan's brothers kill Josip.

Excellent rural drama „The Girl and the Oak“ shows how director Krešo Golik could have made an international career had he been born as a French or Italian citizen, but since he was born in the unknown Yugoslavia where the marketing strategy of promoting films didn't exist for a long time, he remained unknown, but delivered great films non the less. Filmed in gorgeous black and white cinematography and enriched by masterful shot composition, this is a virtuoso directed film that subtly shows the dark human nature, while the fine actors make the impression complete, especially the great Tamara Miletić as the main heroine Smilja, who sadly didn't pursuit an acting career later on. From the first scene in which there is a wide shot of a queue of women climbing up a hill carrying water, the story takes a lot of care for poetry and visual style (Smilja walking on the horizon while in the background a hill with a cloud on top can be seen; a spider capturing a bug in his net; Smilja's silhouette cowered by the sheets hanging on the rope; the composition of the funeral) that make this an emotional experience without resorting to cheap sentimentalism, but instead of wisdom, and the only flaws are the overstretched ending and the sometimes slow pace. Hardly anyone knows about this film – it's neither Fellini or Capra – but it is a throughbred classic nontheless.