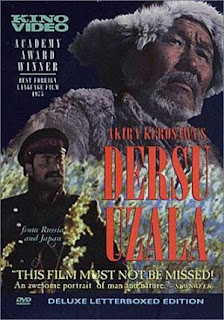 Writer and explorer Vladimir is searching for the grave of his friend Dersu Uzala in 1910, and recollects their first encounter: 8 years ago Vladimir led a group of explorers for an expedition through Siberia in order to make topographic maps. Deep in the forest, they met the sympathetic nomad Dersu Uzala who joined them. When Vladimir got lost at the Hanke lake and a cold wind appeared at night, Dersu saved his life by quickly constructing a tent out of the grass. Dersu returned to the forest, but a few years later Vladimir once again met him and they again experienced a few adventures. Since Dersu lost a great deal of his eyesight and had difficulties hunting animals to feed himself, Vladimir decided to let him stay at his home in the city. But Dersu couldn't stand the city and returned back to nature, where he died.

"Dersu Uzala", a loose remake of the '61 movie with the same title, is one of the most unusual achievements from the Japanese director Akira Kurosawa, financed by the Russian Mosfilm company and realized by a Russian crew, yet the movie won an Oscar as best foreign language film, something at which only his "Rashomon" succeeded before, way back in '51. The plot set in the exotic countryside of Siberia is quiet, meditative and static, but it still skillfully avoided boredom thanks to a thoroughbred adventure tone and irresistibly touching portrait of the friendship between the urban Russian Vladimir and the isolated nomad shrimp Dersu Uzala. There is some simple and wise truth in their adventures, like in the enchanting scene where they save a calf from a hole or when Vladimir and his crew are asleep in the forest at night while the fire is illuminating the trees around them, and other small details that can hardly be characterized as high concept and are thus almost never shown in modern mainstream films that consider them "small" and "unessential". And at least one sequence is ontological; the one where the two heroes quickly collect grass in order to make a tent and save themselves from the cold winter wind before the sunset. There is some unsurpassed wisdom in this small jewel - even though it's not famous, the poetic adventure film "Dersu Uzala" is a shining achievement.