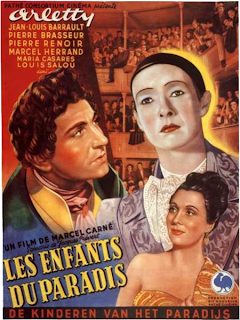 Paris, 1830. Garance is a beautiful courtesan woman whom Frédérick Lemaître tries to seduce on the street. She often hangs out in the store of the pessimistic Lacenaire who sells dishes illegally. In the crowd, she wrongfully gets accused of stealing a watch, but gets saved by the pantomime Baptiste. He become friends with Frederick who finds him an apartment on credit and a job as an actor in the theater. The secluded Baptiste loves Garance and thus gets in trouble in a bar with the jealous Lacenaire. At the same time, Nathalie, the daughter of the theater producer, is in love with Baptiste, even though he doesn't care for her. So she lies to him that Garance doesn't love him. Garance falls in love with Frederick and gets accused of cooperating with Lancenaire, a crook. Finally, Garance leaves the city with the rich Edouard.

Romantic melodrama about unrequited love, gifted with poetic realism, is the most famous and admired film by director Marcel Carne, in '95 voted as the "Best French Film of the Century" in a poll of 600 French critics, even though the exposition is sluggish and the simple story is slightly overlong and melodramatic at moments. Set in the Paris Funambules theatre in the 19th Century, the story starts to hook up the audience when it's interesting details emerge: in once scene, a gentleman accuses courtesan Garance for stealing his watch, but she is disburdened when the pantomimist Baptiste - who is on the reputation that he can even sleep while sitting or standing - hilariously reconstructs the event by at the same time impersonating the gentleman and the thief who got his watch, by "stealing" his own watch with his hand. He acts at times as Chaplin and is pretty charming in numerous situations, like in the scene in the bar where he gets thrown out through the window, but he just simply goes back in to get Garance. But even other characters are very well crafted in this touching and gentle classic, among them a beggar with a bird on his shoulder, who all together make a opulent and harmonious whole, while Arletty delivered a great performance as the leading heroine.

Such a masterpiece! French movies are far better then American and other European movies.

Well, to be fair, it's hard to make a great film. Some French movies are better, some are weaker, it all depends on how they are made.