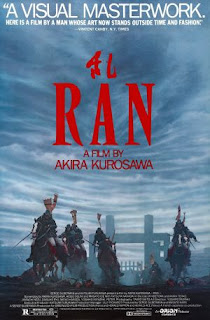 Japan, 16th Century. The old lord Hidetora Ichimonji, who fought numerous wars to build an empire, decides to retire and evenly split his land to his three sons; Taro, Jiro and Saburo. Everyone agrees, yet the heated Saburo sarcastically tells him he is naive and that they will probably double cross each other, upon which the angered Hidetora expels him and his servant Tango. Hidetora then goes to live in the fortress with Taro, yet he expels him since he doesn't need him anymore. He goes to his second son's fortress, but even Jiro doesn't want him. When Taro and Jiro's soldiers attack and kill Hidetora's whole army, but let's him leave peacefully. Taro gets killed by Jiro's general. Evidently, Hidetora realizes that only Saburo really cares for him, since he went with his whole army to get him. Jiro gets killed, and so does Saburo, while Hidetori dies from mourning after him.

From today's stance it's hard to comprehend that the famous Akira Kurosawa was in his entire career nominated only once for an Oscar as best director, and precisely for "Ran", his last great epic Samurai spectacle, yet didn't win the statue. Still, that medieval variation of Shakespeare's "King Lear" shows him in top-notch shape: he does exactly what a director is suppose to do, namely take a seemingly boring, dated and dry story and make it somehow fascinating. From the fantastic opening shots, that seem as if they come from a painting since they consist of people on horses that stand motionless on top of the hill, does the movie build it's quiet but masterful shot composition, underlying also a universally appealing theme of betrayal and greed for power combined with the clever motif that not everything is at it seems at first sight - namely, at first it seems that the old lord Hidetori's sons Taro and Jiro are faithful, and that only Saburo is arrogant and sneaky, yet with time Kurosawa cleverly adds a touching twist where Taro and Jiro are actually the first one to betray him and get rid of him once they inherit his land, while Saburo ends up as the only one who really cares and respects him, since his only fault is that he honestly says what he thinks. "Ran" also has quite a substantial number of opponents who lament about its long running time, yet when the story is so interesting it's hard not to care for it, and many scenes give it a special spark: for instance, when the armies attack the fortress by shooting burning arrows at it, they all fall around Hidotari who doesn't even budge, and when he finds a refuge at some isolated house in the countryside, he is saddened and ashamed to find out he stays at the home of a former victim, a man he blinded decades ago when he invaded his village. A great film.