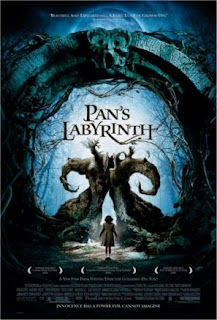 Spain during the Franco regime in '44. The young Ofelia travels with her pregnant mother Carmen to join her stepfather Captain Vidal, a falangist whose army fights against the Marxist rebels. Ofelia discovers a stick insect that leads her to Pan's labyrinth and from there to an underground fairy tale world where she meets the faun that gives her 3 tasks that she must fulfill if she wants to go stay in that world. The first one is getting a key from a giant frog bellow a tree, the second one is to take a dagger away from a fetus looking creature. When Carmen dies but gives birth to Vidal's son, Ofelia gets the assignment to take her brother and bring it to faun, who orders her to take it's blood, but she refuses. Vidal gets the baby back and shoots the girl, but the rebels take over his base and kill him. Ofelia fulfilled her assignments and got to live in the fairy tale world.

"Pan's Labyrinth" was one of the most critically acclaimed films in 2006, but many critics simply couldn't exactly explain why they liked it so much. Only a hand full of them gave good reasons, while all others just resorted to arbitrary, vague and ambiguous praise like "great", "fantastic", "imaginative", "brilliant" etc. That's not to say that it's a bad film - far from it, yet despite all, I somehow had a hard time "deciphering" brilliance from all those surreal scenes. It's a good film, an interesting exercise in dark fairy tales for grown ups with a Gothic mood, but that's hardly a reason to call it something more than it is. We are given two parallel stories; one about the war between Franco's army and the rebels, and one about the girl's fantasy world, yet they are always separate, never connected and do not complement each other in any way. In fact, the entire film never connects in any way, it's just like vignette after vignette. Maybe one could say that the giant frog that lives as a parasite under the tree could be a symbol for the dictator parasites in the world, and one could say that the fetus looking humanoid with eyes on his hands that attacks Ofelia in his room could be a symbol for her unborn brother and their rivalry, and one could say that the biggest monsters in the story are actually humans during the war, yet one can't shake the feeling away that it's all slightly vague. Ivana Baquero is marvelous in the leading role and one of the handful of truly poetic moments comes at the end, when the narrator says the magical words: "...and she left small traces of her existence, for all those who knew where to look". Guillermo del Toro seems like a very intelligent person, and frankly it's more fascinating to listen to his clever thoughts and worldviews in the DVD audio commentary than to just look at the film itself.