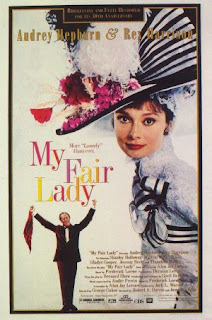 London: the poor, backward Elize is selling flowers in the rain when she hears Mr. Pickering, an expert for dialects from India, and Mr. Higgins, an expert of phonology, how they think that they can make a lady out of her in 6 months. Since she has a drunk father, she goes to Higgins' house and offers him money if he can cultivate her, but he decides to give her lessons for free because he likes the idea. He gives her chocolate and torments a torment with her horrible accent, but still learns her proper grammar. On the horse race and some manifestation, everyone mistakes her for a duchess, while Freddy falls in love with her. Elize leaves Higgins because he treats her poorly, but she returns to him and everyone is happy.

Musical "My Fair Lady" won 8 Oscars, 3 Golden Globes and one BAFTA, all for best picture, but with time it is drifting further and further away from the status of a classic. It seems the awards were given only because the director George Cukor was not already awarded previously for his better, classic films. That light, simple comedy is functional in the first half, where it apprehends the grade 'good', but in the other act it starts to drag with overlong and dated musical sequences and poor music that doesn't have enough melody. The thin, but charming story about the transformation of the poor backward girl Elize into a lady still has small crumbs of appeal and could have served Cukor for a brilliant film, and not a naive soap opera with childish dance scenes - in one of them, Elize just goes from one end of a waggon to another, and thus bends it. The overlong running time of 3 hours also did not help the impression, while the only two real virtues are the sweet Audrey Hepburn, even though she was pushed too much in the background, and excellent Rex Harrison. From their chemistry a few good gags appear, like the scene where she talks and a machine is registering a graph of her accent or when Harrison declares: "When I'm finished with you, London will be full of corpses of young lads who killed themselves due to your unrequited love" - yet the film could have been better.