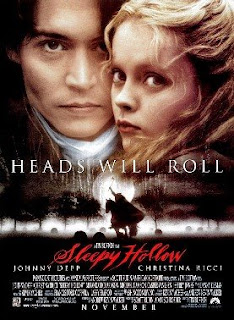 1799: Police constable Ichabod Crane gets sent from New York to the small village Sleepy Hollow to investigate the case of a mysterious headless horseman who kills the inhabitants cutting off their heads. Crane meets the young Katrina and falls in love with her. Some boy, whose parents were among the victims of the horseman, helps investigating them and they discover the Tree of the Dead. Crane finally discovers the horseman is killing only one family since someone controls him in order to remain the last member for inheritance. That's Katarina's stepmother who gets pulled down to hell by the horseman when Crane gives him his head back.

That by which "Sleepy Hollow" will be remembered by will only be the detailed set decoration, rewarded with an Oscar, because the gross was over 100 million $ in the US, but such a film doesn't deserve to be a hit. There are some wonderful scenes present here, like the light figures that are screened on the wall from the lamp or the dreams of the protagonist, but they are essential to redeem for such ground trash that was created among others by the explicit images of decapitation of some dozen characters in the story. Such banal horror and cheap tricks make the film seem pretty lame. Tim Burton is a director who loves the creepy side of the world, yet calling him an outstanding author just for that is rather overstretched since most of his worlds seem shallow - frankly, what's the difference between him who likes the Gothic touch and an other director who likes the kitschy touch? They are essentially the different sides of the same coin. The other problem of the film are the sadly one-dimensional characters - Christina Ricci, for example, has no charm and her role is bleak, avoiding the romance with Crane, who is on the other hand rather interesting person, a logic man of science lost in a fantasy world. Not even the fight with the headless horseman is imaginative, while the ending seems like some Agatha Christie imitation.