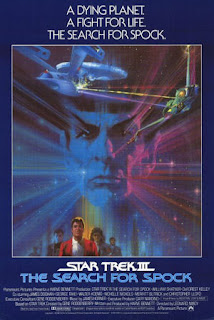 After Mr. Spock died repairing the reactor of the Enterprise, the coffin with his corpse was thrown to planet Genesis. Heavily damaged, the Enterprise returns to Earth's orbit. But Spock's father Sarek contacts Admiral Kirk on the space station because he feels Spock might have resurrected since Genesis was illuminated with life thanks to the "Genesis" project. Together with his crew, Kirk heads to that planet, but there he gets attacked by Klingon's Commander Kruge who kills his son. Kirk blows up the Enterprise together with Klingons in it, but his crew manage to save themselves and find Spock alive.

There's an unwritten rule regarding the original "Star Trek" series: movies with divisible numbers—2, 4 and 6—are good, while those with indivisible ones—1, 3 and 5—are weak. The critics more or less agree upon one thing - namely, "Star Trek III" is no exception to that rule since it mostly lapses behind it's forerunner. It's a very dark, depressive, but also very tiresome sequel, deprived from any kind of charm or humor, while there wasn't an end to all the pulp mood and uninventive execution, but it had to be filmed since many fans sent a ton of complain letters back in '82 in which they lamented upon the fact that their beloved character of Mr. Spock died in part 2, and thus the authors decided to bring him back. Even though very routine and exciting exclusively to "Star Trek" fans, but not to the general audience, part 3 still managed to become a hit. Leonard Nimoy, this time in the director's chair, didn't succeed in inserting more color in the bleak story which is just one giant gimmick to bring Spock back, yet 2 years later he surprised everyone with part 4 where he got a record amount of praise.