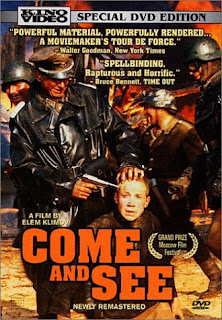 Belarus, World War II. The 15-year old Florya and his friend dig out a rifle in a sand field. Florya volunteers to go fight the Nazis who annexed his country in order to create Greater Germany, and joins the army operating in the forest. Suddenly, an air strike hits their base and he runs away with a girl, Glasha. He goes back to his village only to find everyone killed, which causes him to go insane. He and another Partisan fighter take away a cow from a farmer to feed the hungry people, but it is killed in an ambush. The SS troops invade a village and start a horrible line of crimes, including burning homes. They are captured and killed after a trial from the villagers, while Florya shoots repeatedly at the picture of Hitler, causing all of the events from World War II to go backwards until Hitler is transformed back to a baby.

The final film by director Elem Klimov, "Come and See" is a 'tour-de-force' war film that becomes more and more disturbing until it turns almost unbearably anxious in the final 30 minute sequence of the atrocities done by the occupant troops in the village, to bring the message of the film across - namely that in war everyone is degraded to an animal state. The story is filled with brilliant details somewhere between poetry and nihilism: a bomb hits the base in the forest and causes the sound of the film to become mute in order to simulate how the protagonist Florya became almost deaf after the explosion; Florya cheerfully shakes the trees in the forest and causes rain drops to fall down, causing a rainbow on the ground while Glasha dances with a hat on; the long, virtuoso take of Florya taking a cow and running with it for hundreds of yards on the meadow while the camera "walks" behind them; the Nazi troops burn a house and carry a bed with a helpless old grandmother out on the meadow, leaving her there.

Undeniably pretentious, heavy and tedious at moments, this film is still a very powerful, hypnotic image of madness, while the finale with the 15-year old Florya, who got grey hair and aged for decades after the shocking situations, pretty much says everything there is to be said about the tragic consequences of once innocent generations and families that were destroyed by war and invasion, speaking in symbols about some timeless cycles through history: even though it is set during World War II, the film may have also been a deliberately sly commentary on the Soviet war in Afghanistan, a conflict which waged during that time, just as Altman's "M*A*S*H" was actually a sly allegory on two wars, not one. The semi-allegorical ending is interesting, though it could have been more clever since it marked Klimov's farewell to cinema.