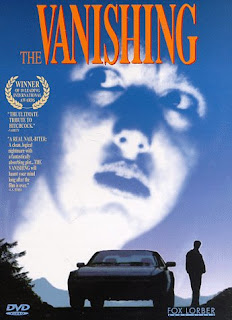 Rex and Saskia are a Dutch couple traveling from the Netherlands to France. Their car runs out of fuel and stops in the middle of a tunnel, so Rex leaves Saskia alone to fetch some gas in a can. Resuming their drive, the couple makes up and stop at a rest area. Saskia goes into the store to buy some drinks, but never comes back. Rex contacts the police, but to no avail. Three years later, Rex is still searching for Saskia and plasters the streets with her missing posters. Finally, he is contacted by the perpetrator: Raymond, who invites him to drive in his car to France. Raymond, a seemingly normal family man, then reveals he kidnapped and chloroformed Saskia and offers to tell Rex what happened to her if he drinks coffee with a sleeping pill. Rex does, falls asleep and wakes up inside a coffin, buried under the earth.

A rare example of a 'minimalist thriller', George Sluizer's most famous film is also highly untypical and unconventional in its structure: the murderer is revealed already 24 minutes into the film, whereas it contains only a single scene of violence, yet its creepy tone keeps the viewers intrigued until the end. Not since Myers from "Halloween" or the unknown killer from "Zodiac" has there ever been such a disturbing murderer as Raymond Lemorne, precisely because he is, just like the said villains, a symbol for evil without a motive. Unlike other killers, he is perfectly rational and without any urge. His murder is not motivated by hate, nor by any self-interest or ideology. Neither was he interested in raping Saskia, nor was his act caused by loneliness, since he is a happily married man, a chemistry teacher with two kids. He is what makes the whole story so unsettling, so puzzling, since his reasons cannot be comprehended. This is also what distinguishes Sluizer from Hitchcock: despite several thrillers and crime mysteries, Hitchcock's main character was always the good guy, while here Sluizer picks the bad guy as the main character.

In flashbacks, Sluizer shows him meticulously preparing for the misdeed: he buys a secluded cottage on the land and puts spiders into a table, causing his teenage daughter to scream. Later on, he asks a far away neighbor if he heard the scream, and when the farmer confirms he didn't hear anything, Raymond realizes the place is suitable for noise isolation due to its remoteness. He lies on a table and chloroforms himself, only to later on, upon waking up, look at his stop watch and write down in his notes that he was unconscious for 18 minutes and 54 seconds, which means his victim has to be no further than 17 minutes of car drive away from the cottage. While "The Vanishing" suffers from an overstretched running time and an occasional 'empty walk', especially in the second half, it has just enough tricks, ideas, taste and sophistication to fill its entire running time with something to see. There is something of a philosophical question by the villain: in a flashback, Raymond tells how he jumped from a balcony when he was 16, and broke his bones, just like that, to show that it is "not predestined", i.e. that his free will trump that he wouldn't jump. He then mentions he actually saved a girl from drowning in water, but something bothered him: "My daughter was bursting with pride. But I thought that her admiration wasn't worth anything unless I could prove myself absolutely incapable of doing anything evil. As black cannot exist without white." As if he wanted to find out if he can go from one extreme (saving life) to another (taking life). His goal was not to gain something from self-interest, but in contrary, to lose a part of his own respect by showing that he is not worthy enough of his daughter's admiration due to his crime. The ending shows his own failure of idealism for actually going through with his own plan, in a dark vision of free will.