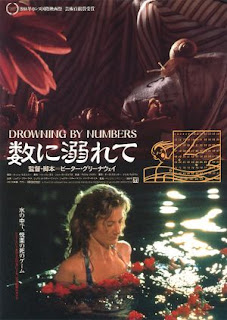 A girl is playing jump rope. Old lady Cissie Colpitts catches husband Jake in the middle of an affair and drowns him in the bathtub. There are also two other women who are also named Cissie Colpitts and who support her, while their friend is the undertaker Madget who makes the murder seem like an accident. Boy Smart marks every corpse of an animal he finds with a number and a firework and thinks death appears most on Tuesday. During the wedding of the younger Cissie, the older Cissie spots that he husband Hardy got a cramp in the sea. The following day she drowns him there and pretends it was an accident in front of a few marathon runners. And the young Cissie drowns her husband - in a pool. Then Madget rebells against them and calls the police. Smart hangs himself while Madget and the Cissies go to a sinking boat.

This genius grotesque doesn't lead a crime story but sends the viewers into a surreal world, full of symbols, but, unlike a mass of other demanding art films that becomes empty and boring, this one is wonderfully even and enchants with an innovative visual style. Already the first scene brings an eccentric tone since it shows a little girl playing jump rope while her shadow is seen on the wall of a house and she is counting from "15 Sirius" to "50 Castor". There is also a daft boy who jumps while the photo camera makes a shot of him; lovers who cuddle naked while butterflies and snails are circling behind them; two wacky guys who suddenly surface from the water in the pool and ask a swimmer: "Good day. Are you Cissie?" The confusing story doesn't have much sense which is why the viewers shouldn't regard it from a logical, but intuitive point of view, since it's somehow crafted in wonderful harmony: especially fun in "Numbers" is looking out for numbers ranging from 1 to 100 that appear throughout the film, printed on cows, bees, trees and objects, almost cowertly marking the running time of the movie. If one can have an open mind for it, it's quite simply a shining avant-garde film.