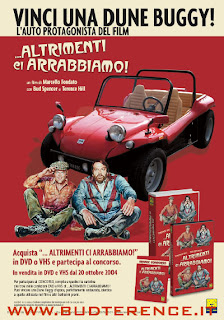 Kid and Ben win a marvelous dune Buggy in a race, but cannot agree who of the two will get it. They decide to undergo a food contest in bar, but the place gets demolished by some gangsters who demand racket. Ben and Kid are not bothered by that, but when the gangsters lose control and destroy even their Buggy, they politely send their boss a message to buy them a new one. The mafia boss doesn't even consider that possibility and attacks them with a motorcycle gang, assassins and criminals - without success. When Kid and Ben lose their patience, they go on to personally destroy his mansion, until he bends to their demand and gives them two new Buggies.

The famous Italian comic duo Bud Spencer and Terence Hill, obviously leaning towards the influence of Laurel and Hardy, was never especially acclaimed by critics due to their crowd pleasing slapstick comedies that always culminated with childish fist fights. The once popular hit comedy "Watch Out, We're Mad" is actually one of their best films, with a deliciously simple concept - this time the duo fights against a mafia gang because they destroyed their car. Basically, it's a simple, thin film. However, director Marcello Fondato hilariously crafted some scenes and rises to the ocassion: the getaway of our heroes from the motorcycle gang in the forest, vibrant songs ("Dune Buggy"), the gym fight sequence, the scene where Kid (Hill) is teasing the professional assassin by hiding in a choir in an opera and always going from extreme right to extreme left to mess up his clear chance at a shot, but the highlight is definitely the finale where Kid and Ben enter a car and crash enter into the mafia mansion, exit and beat up everyone around them while there are thousand of balloons on the ground: truly, a riot. Also, the story actually contains a nice archetype of two average guys who take on the superior bad guy - in this instance, because he destroyed their car - and always keep the upper hand. Donald Pleasance has a nice little role as the evil doctor and the rhythm and gags exchange with dynamic interaction. This comedy isn't anything revolutionary and today many don't even remember it, but it still holds up fairly well and is a lot of mad fun.