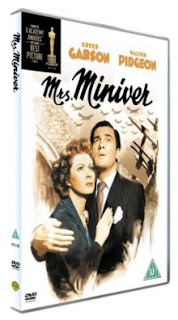 A village near London on the eve of World War II. Mrs. Kay Miniver lives in a happy marriage with her husband Clem. Together, they have two little kids, Toby and Judy, and one grown up son, Vin, who returns from Oxford. Vin quickly falls in love with the neighboring Carol Beldon, but then the war starts and Germans start bombarding Britain. Vin becomes a war pilot and marries Carol, while Clem leaves for the front for a week. When he returns, Kay reveals him she captured a German spy in their home. During bombardment, Carol dies.

Oscars are obviously not the only warrant for a timelessly famous movie. War drama "Mrs. Miniver" won 6 Oscars (best picture, director, screenplay, cinematography, actresses Garson and Wright) and yet it still became forgotten during the course of the time. However, even though the story is a real propaganda that unconvincingly emphasizes patriotism - even director William Wyler admitted he made it only to convince the US to commit to the World War II - it's still sufficiently skillful and eloquently made, thus the main fault for its anonymity lies in its too moderate tone. Greer Garson is truly excellent as the charming Mrs. Kay Miniver: in the exposition, we find her accidentally entering into the wrong bus that leads her into the wrong direction, so she tries to get out. That scene is only a neat little observation, but it nicely displays her character. The first half of the film is cheerful, calm and upbeat (a conductor names his rose "Mrs. Miniver"), sometimes even a little bit kitschy (Vin proposes Carol to marry him during lunch in front of his parents), evidently seeming fake and too idealised now that the war in Britain is over, but that only caused the second, rough half, in which the war starts, to turn out more intense. Richard Ney, the actor who plays Vin, is slightly miscast for the role because it is obvious he is only 11 years younger than his "mother", Kay Miniver. Wyler's war drama is despite its flaws still an ambitious, serious and poignant movie about the psychological consequences of war and it's destruction of an average family.