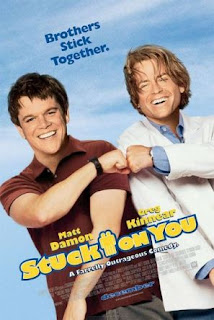 Bob and Walt are two conjoined twins living in Martha's Vineyard, where they work in a fast food restaurant. When Walt announces that he wants to become an actor, Bob has to more or less adapt to his demands and leave with him for Hollywood. They rent an apartment but don't have any success because nobody wants to have Siamese twins in a film. But when they meet Cher, she engages Walt in the leading role of a cheap TV show hoping it will be canceled and she released from the contract. But the show goes on and becomes a hit, while Bob is heartbroken when his pen pal girlfriend May leaves when she finds out he is conjoined with Walt. Walt convinces him to make an operation. They separate and start their own lives.

The Farrelly brothers are one trick ponies - even though many critics dismiss them as "dumb" and "infantile", they are actually pretty clever filmmakers that dare to show sympathies towards outsiders: just like in most of their previous films, "Stuck on You" also displays two unusual heroes - in this case two Siamese twins - that would have probably only been supporting characters in some other Hollywood film. "Stuck" has flaws: it's pretty much similar to all other Farrelly brothers films, it has plot holes (Bob and Walt are supposed to be twins, but don't look alike; the connecting tissue between them looks fake), the Hollywood tangle is vague and small roles by Cher and Meryl Streep are rather useless. Still, there is simply something about this film that makes you engaged and even think about it. Just like in their previous film, the terribly underrated "Shallow Hal", the Farrellys dropped their trademark political incorrectness from early films and created a sweet, gentle and pure tragicomedy - during the course of the entire film, there is only one, solely one vulgar moment.

But even in their early, vulgar gross out comedies - with the exception of their first film - they showed some kind of spirituality and dignity for their characters, even if it was not obvious. The movie has some good gags - for instance, when the then 17-year old Frankie Muniz makes a 3 second cameo as Cher's under aged lover in her bed, or the various moments where Bob is trying to hide the fact that he is stuck with Walt from his left side in front of May, explaining his presence on their first date with: "My brother is a little bit clingy!", or when the TV crew is also trying to hide it by filming Walt only from the extreme left side of the screen, avoiding Bob to pop up - but the majority of the story is actually subtly touching since it speaks about spiritual connection between the two heroes. Once when they separate, they gain independence, but are alone for the first time in their lives. Just take the scene where Walt sits on a bench and comes close to a statue of a man, leaning on him as if he is his conjoined twin - no words are needed to describe that he misses something in his new life. From the exposition up to the distinct final last scene before the end credits, the Farrellys remain Hollywood's rare modern humanists, and one wishes to have courage enough to admit that they are something more than it seems.