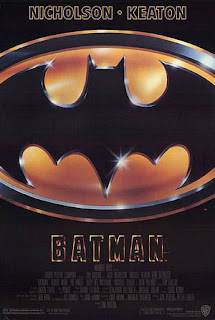 Gotham City. A family gets lost in the alley and robbed by two thugs. But those thugs get beaten up by Batman, who disappears into the night. Journalists Alexander and Vicki are investigating the manner and meet millionaire Bruce Wayne. At the same time, Jack Napier, an influential gangster, gets fraud by his boss Grissom who sets him up in a chemical lab. In a shootout, Batman catches Jack, but he slips from his hand and falls into an acid pool, later on resurfacing as the Joker to terrorize the city. Bruce falls in love with Vicki and admits her his secret: he is Batman. At the city's 200th anniversary celebration, Batman and Joker have a clash. Joker dies by falling from a chapel.

Tim Burton wisely chose to direct "Batman" by dropping the campy tone of the '60s TV show with the same title and replace it with dark elements, but still failed to shake away the cartoonish mood of the story as the whole. As a result, the movie turned out to be a fast, slick, dynamic action film with a Gothic set design of Gotham City, inspired by old German expressionistic films, where bright, cheerful colors and humor represent the bad guy (Joker) and dark colors and seriousness the good guy (Batman), yet the naivete of the standard good vs. bad superhero story is still extremely palpable in one dimensional approach and flat characters. Truly, as dark as the story is, how could a serious moviegoer believe that Jack Napier would fall into an acid pool and survive as the white faced Joker? Not to mention his cheesy lines, like when he kills a crime boss by stabbing him with a pen into the throat, and states: "Truly, the pen is mightier than the sword".

Still, Jack Nicholson has a field day as the Joker and does not hesitate to ham it up big time, creating often funny cynical lines which compensate for a lot of things. Sadly, Joker even overshadowes Batman/Bruce Wayne, who comes across as a rather pale character, while this is sometimes a stiff film, and only few scenes radiate from inspiration, freshness and life: the highight is a great sequence when Joker and his men are havocking in a museum by messing up famous paintings in the tune to Prince's song "Partyman" or when Joker surprisingly pops up on TV interrupting the speech of a councilor by simply "whipping" him out of the TV by moving his hand from right to left. Emotions are also not the strong point of the film since pretty much the only real dramatic scene is the one where Bruce remembers how his parents were killed by Jack, yet deeper character development and psychological insight into Batman's and Joker's double personalities and their influence on each other are absent and were replaced by action sequences. "Batman" is an enjoyable, eerie and eccentric cult film, and it's more fun if its big fans simply admit it's a comic-book film.