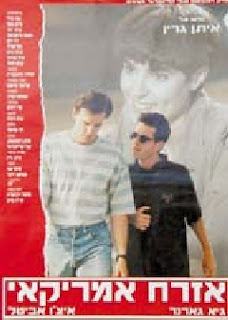 Michael is a 31-year old American basketball player whose career is diminishing after an knee injury. He moves from the US to Israel to play for a small team in Ashdod for a year, even though his new manager Amnon has a bad reputation. After a bad article written about him in a newspaper, Michael meets journalist Yeol Levi: even though he didn't like the article, he becomes his friend. As their team looses one game after another, Amnon backs out as the manager without paying the team the promised money and Yeol jumps in with his stepfather to save the team. Michael also falls in love with Yeol sister Rachel, a piano player. Their team manages to win a crucial basketball game and Michael says farewell to Yeol, going back to the US and knowing they probably won't meet ever again.

Eitan Green's "American Citizen" isn't one of the best films from Israel's cinema - quite frankly, it doesn't even look like a Israeli film since in 95 % of the time the main protagonist, American basketball player Michael, speaks English, while Hebrew language, culture and mentality is surprisingly presented in a very sparse way. Maybe that's due to the fact that the movie is actually an American co-production. Even though Michael seems a bit lost in Ashdod, the story is hardly a "fish out of water" plot since he doesn't react to the new environment enough - the exception is only a small scene when he is asked from his neighbors to join a Jewish prayer because there must be 10 people present after his mother died, and he seems a little bit "off" - thus it could be more precisely called a story about a character returning back to his roots, because he himself is Jewish, even though he can't speak Hebrew. Some critics have interpreted the main tangle of the film, the friendship between the American Michael and the Israeli Yoel, as an allegory about the US-Israel relationships, but it would be far more true to interpret it as a friendship between two sad outsiders: both suffer from a physical sickness (Michael has an injured knee, Yoel suffers from epileptic attacks, most noticeable in the scene in a bar after he had an alcoholic drink) and feel disillusioned by their jobs. The film is very thin and fragile, acting sometimes even as a TV drama, not managing to intrigue the viewers except for some sports sequences of the basketball game. It's touching, but simply doesn't have much to show, turning out too lukewarm for comfort. Still, it's an sympathetic, solid film and all actors are very good in their roles, from Guy Garner as the main protagonist up to the charming Ava Haddod as Rachel in a underused role. If anything, the final scene where the two friends part, never to meet again, contains some kind of lyrical beauty and sadness.