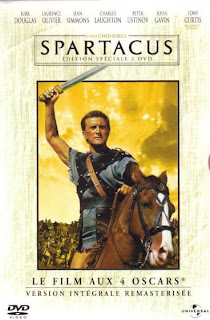 1st Century B.C. Somewhere on Libyan soil, slave Spartacus is working in a mine. Then the rich Batiatus buys him and trains him as an gladiator. Spartacus falls in love with the slave girl Varinia, but looses in his first combat for life or death, yet his rival Draba, his friend, spares him and attacks the viewers in the arena who kill him. When Varinia gets sold Spartacus starts an uprising of the slaves and demolishes the Roman fortress. The rebellion spreads out throughout the Apennine Peninsula while Spartacus and Varinia reunite and get a child. The Roman Senate exiles the ships of the pirates who were supposed to transport the rebelling slaves from Sicily to Africa. The army catches them and executes them on the cross. Batiatus gives freedom to Varinia and leaves with her while she observes the dying Spartacus.

Impressive epic flick "Spartacus" is brilliant while it's portraying the politics of the Roman senate and senator Gracchus (excellent Charles Laughton), but weaker and stiffer when it's revolving around the title hero who is a little bit incomplete and pushed into the background. The reason the politics of the senate and laws of Roman empire are so fascinating lies in the fact that the screenplay by Dalton Trumbo, although cheesy and naive at moments, holds unusual and surprising parallels with sympathy towards Communism, even though many viewers won't notice it. But here's the enlightenment: the slaves who work in inhumane conditions for the spoiled and arrogant Roman masters are in the same condition as the proletariat which is exploited by the bourgeoisie, and the rebellion of the slaves seems like an outcry for revolution, according to Trumbo. It's an interesting message about universal exploitation, but "Spartacus" is the only film Stanley Kubrick directed by order of the producers and didn't have complete control - everything was subordinated towards the messages - which explains the dry, theatrical, standard and unplanned tone for the director. Actually, for most of the time, "Spartacus" doesn't even seem like a Kubrick film, but more like a DeMille film. Kubrick himself noted how the screenplay is full of dumb moralizing. Still, "Spartacus" won 4 Oscars (among others for best supporting actor Peter Ustinov) and one Golden Globe, for best motion picture -drama, becoming the only Kubrick film to win the that award in the best picture category. The film speaks about honor and will, but that doesn't mean it's automatically superior from the movies that don't handle that subject because it lasts for over 3 hours and looses some of it's concentration on the points. The only honest moments are one where an old woman is arguing with Spartacus in order to show him how she is still full of energy or when Antoninus, a run away slave, is conducting magic tricks with a bird that flies out from an egg. He is played very well by Tony Curtis, who is probably the best among the powerful cast.