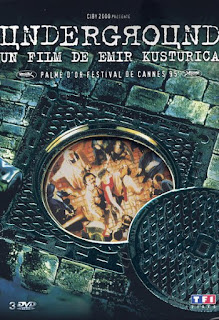 Belgrade, '41. Marko and Petar "Black", two of best friends, are surprised by World War II and the invasion of Nazis. In Marko's house there is a bunker where they hide. But since Petar wants to marry actress Natalia, in whom Marko is also in love with, an intrigue happens: Marko puts Petar, brother Ivan and 20 other people into his bunker, telling them the bombardment is still under way...In '61, Marko marries Natalie and keeps lying to the people in the bunker that the World war is still going. But Peter goes out and starts a "fight" with some actors playing Nazis while Marko blows up the bunker...In '92, Peter is disillusioned and still leads a war against everyone, while his soldiers kill Marko and Natalia. When he realizes a new war started in Yugoslavia, Petar commits suicide.

Epic grotesque "Underground", directed by Emir Kusturica and written by the inspired Dušan Kovačević, divided the critics: some praised the brave, bitter story about the cataclysm of war and mentality of war while others complained about the extortionately grotesque tone, pretentiousness and overlong running time of almost 3 hours. Still, "Underground" won the Golden Palm in Cannes, its surreal pictures are full of felliniesque style, some moments are virtuoso directed while the story is a cynical mix between "The Truman Show", "36 Hours" and "Wag the Dog". Bizarre sequences, like the bombardment of the Zoo from which animals escape (a similar scene was initially planned to be filmed in comedy "Who's That Singing Over There") or archive films of the invasion of Nazis in which actors Manojlovic and Ristovski were "slipped in", as well as the bitter plot in which Marko is lying to Petar that in '61 the World War II is still going on as an excuse to keep him in the bunker in order to marry his Natalia, affirm an undoubted message: even after it is over, the war is used by manipulators in order to exploit people who only before death discover that their lives were missed out.

That was bravely shown in the sequence where Petar exits the bunker in '61 and attacks a movie set full of actors who were playing Nazis, thinking they were real Nazis. Some have also interpreted the story as an allegory about the 6 states in Yugoslavia that were forcefully kept together under propaganda and manipulation from the regime who invented imaginary enemies from the West, while a further interesting feature is that it perceftly summed up the modern mentality of some Slavic countries (not only on the Balkans), whose citizens can only think about WWII, are stuck in the past, thus  unable to move on and live their own lives in the present. Kusturica does not always hit the right note: true, the story about the perversion of war and manipulation of war is so nauseous it will make some viewers sick, but the way he presents Serbs (exaggerated Balkan and backward mentality displayed as "cute", aggressiveness, back stabbing...) is not always understandable to everyone. Still, "Underground" is simply too powerful to be dismissed and has to be seen.