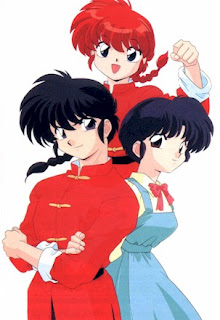 Ranma and his father Genma were practicing kung fu fights over forbidden lakes. But they fell into those magic lakes and soon found out that, as a consequence, they were "cursed"; in touch with cold water, Ranma would transform into a girl and Genma into a Panda. Only hot water could turn them back again. Back in Tokyo, Mr. Tendo agreed with Genma to arrange a marriage with his daughter Akane and Ranma. But since Akane is the most popular girl among boys in school and Ranma always argues with her, their relationship is very problematic. There is also Ryoga, who transforms into a little black pig when in touch with cold water and who is in love with Akane, and a girl called Shampoo, that transforms into a cat and who is in love with Ranma.

Quirky anime comedy series "Ranma 1/2", based on the manga written by Rumiko Takahashi, a specialist for romance stories, enjoys a high reputation. Many even regard it as a masterwork. Indeed, the clever plot about a guy, Ranma, who transforms into a girl when coming in contact with cold water - only when splashed with hot water can he transform back to a guy again - neatly ridicules the male/female stereotypes and mocks macho behavior with delight. But the fact remains that "Ranma 1/2" is only a good TV show that was milked to death with too many episodes, until it became overstretched and unfunny. Actually, it has more fights than humor. Too much excessive fights, about boys who battle each other to get a girl, Akane. Is this suppose to be a romantic comedy or "Dragonball"? Truth be told, some ideas were very nice. For example, when Ranma is dreaming that he/she has become gay or when his/her father Genmo is reminding him that he is his son, and not his daughter. Or when Ranma says that he is going to marry himself. Or when Ranma isn't ashamed to walk around naked as a girl because it isn't "his gender anyway". But at the same time one can't shake away the feeling that we expected something more, something that gives deeper insight into male-female relationships, like in the film "Victor/ Victoria". Sadly, this anime lacks it.

Since Ranma is a boy he should have used his ability to transform into a girl to influence other boys in a much better way. The biggest problem is an explosion of useless characters. It's hard to figure out what the purpose was to have other people that can transform when coming in contact with water too, especially when they transform into such stupid forms like a panda, a pig, a cat or a duck. And that perverted old man that was always molesting girls and stealing their bras was one of the most annoying anime characters ever and stayed in far too long in the story. Ranma would always beat him up, and yet he would always appear in the next episode. Sadly, with time the show simply lost it's charm, turning too forced, silly and contrived for comfort, when in fact it should have just simply focused on the relationship between Ranma and Akane. Rumiko Takahashi wrote mangas that turned out to be great animes, like the brilliant "InuYasha" and masterwork "Maison Ikkoku". Unfortunately, here 161 episodes really seem to last too long and many possibilities were left unused. "Ranma 1/2" truly deserves its title. It used only 1/2 of its potential.