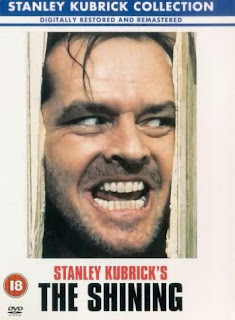 Hotel Overlook lies isolated somewhere in the middle of the US. During the winter, writer and former alcoholic Jack Torrance was hired to take care of the building and the heating together with his wife Wendy and son Danny. The last caretaker went crazy and killed his daughters, and Danny has that visions, and also the one where his father goes into the room 237 where a naked woman is kissing him and then transforms into an old lady. Jack's mental health starts deteriorating and he starts imagining a janitor is persuading him to kill his family. He has an argument, upon which she kicks him unconscious and locks into the pantry room. But the ghost frees him and Jack kills an accidental Head chef, Dick. Wendy and Lloyd run away while jack stays alone outside and freezes to death.

Based upon the horror book by Stephen King, "The Shining" is a suspenseful, stylish, but incomplete and somewhat vague film, the first of Stanley Kubrick's last three films where he went on to demand too much excessive technical perfection on the expense of story and character development. Kubrick directs the story with a disciplined style and without explicit violence, and neatly creates a rarely seen mood thanks to "floating" Steadicam, like in the scene where the camera follows Wendy and Lloyd walking around the bush labyrinth. But the enemy never shows up. The first 50 minutes has only a creepy music, but not a real threat. In the end, it seems Jack Nicholson's character Jack becomes mad and homicidal from boredom and isolation, but a lot of thing seems confusing, even though the finale is a highlight. During the course of the film, it is mentioned that the Hotel is build on an Indian graveyard, but the ghost and paranormal vision are connected rather thinly. Since there many mirrors present whenever Jack is talking with a ghost, some have interpreted the film as an allegory about the killing of the Indians and their injustice haunting new generations that settled on their land. Among the iconic scenes is the slow motion shot of a sea of blood coming from an opening elevator and Jack's head popping in the hole of the door. Kubrick was always a realist and pessimist - to him, things happen because it is "realistic", but for some other directors, things happen because it is "magic". In this story, Kubrick dwelled into magic and fantasy, but didn't find the real key note to have an amazing point. In that aspect, "The Shining" is just a good, not a shining film.