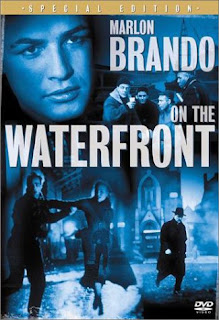 A port in New York. Head of the Trade union, Johnny Friendly, is a real mafioso who is becoming rich by membership fees of the workers whom he terrorizes and personally chooses who can and who can not work. Ex-boxer Terry Malloy and his brother Charlie work for him. When Johnny kills worker Joey who wanted to turn him to the police, Terry starts having doubts. Joey's sister Edie and priest Barry are strongly against Johnny, and after Charlie gets murdered Terry decides to testify against Johnny in the court. Johnny punishes him and forbids him any kind of work. Terry has a fight with him and thus gains sympathies from the workers and a job.

Codger Marlon Brando won the Oscar on two occasions, for his legendary role as Don Vito Corleone and as shy, confused Terry Malloy in the fierce drama "On the Waterfront". The latter is a suggestive film from powerful director Elia Kazan, that is not regarded as one of the greatest classics in cinema for nothing. The sequence where Edie finds her brother murdered and replies to the priest with: "Where was the dear God to him? He didn't help him!" is incredibly bitter even today, but equally strong is the one where Johnny's people are breaking the windows of the church and driving out the workers in it. And yet, curiously, does the story contain one of the most magnificent roles of a priest on film, the one with pastor Barry (the best role Karl Malden ever delivered) who fights for the freedom of workers and speaks against Johnny's criminal methods, even though he gets targeted with tomatoes. A virtuoso directed masterpiece with electrifying emotions and dialogues ("You don't understand! I could have had class. I coulda been a contender. I could've been somebody, instead of a bum, which is what I am") that through the story about corrupt trade union leaders symbolically discusses the abuse of power and oppression of the "little man", thus the character of the greedy Johnny can even today be easily recognized with his actions by modern audiences, and the subplot about the hero's redemption is cleverly staged.

One of my favorites. Good review. I never agreed with Elia Kazan's politics, but this is a superb movie.