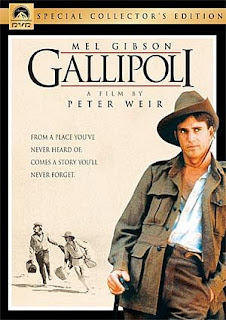 Australia, World War I. Young Archy is a fast sprinter and wins in a contest by surpassing a man on a horse. In a big match, Archy outruns even Frank, who made a bet that he will loose. Overwhelmed by reports of war heroes in the newspapers, they decide to enlist to army with their friends: Archy for the glory, Frank due to boredom. They exit from a train and cross the desert to Perth, where they ship to Egypt. There they amuse themselves with prostitutes and buy old antiques. On the Gallipoli peninsula, they get the order to divert attention of the enemy with a march. Frank runs to the commander to stop the suicidal mission, but Archy dies in it.

Earlier movie from later very successful Australian artists, director Peter Weir and actor Mel Gibson, "Gallipoli" is a sightly superficial antiwar elegy that loosely get the title from the peninsula where the heroes debark in the finale. The meditative Lean-like story is confusing and at moments boring since the protagonists Archy and Frank are shown for too long in marginal events (in Egypt, they amuse themselves with prostitutes or argue with a salesman who sold them an antique statue for 2 pounds when in fact it's worth only 5 shillings) therefor creating a bad timing which presents the war sequences very late, some 75 minutes into the film (the running time is total is 100 minutes). Weir represents the movie world in a rather mild and cold manner, but it's ambitious, realistic and deliberately unconventional for a war flick, non the less (in one ironic scene, the heroes meet an old man in a desert who doesn't even know there is a World War going on), which justifies the fact that it was nominated for a Golden Globe as best foreign film, while the music by Brian May is simply fantastic, due to it's magical and meditative tone similar to the music in Weir's next film, "The Year of Living Dangerously", and the last scene, in which Archy gets "frozen" in a suspended frame, is poignant and tragic.