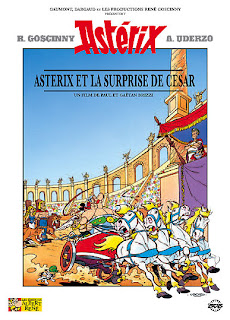 50 years B. C. Obelix meets the blond Falbala and falls in love with her. Asterix is worried because Obelix doesn't show interest in anything and acts distracted, even falling into depression when he finds out she is already engaged with Tragicomix. But as Falbala and Tragicomix are kidnapped by Roman soldiers and sent to Africa as slaves, Asterix and Obelix set out to save them. The young couple falls into custody of the Bedouins, and in the end are sent to Rome to be sacrificed in the arena for Caesar's birthday. Luckily, Asterix and Obelix enlist as Roman soldiers and save them.

Following the process where every new Asterix film was better than the previous one, the 4th sequel, "Asterix Versus Caesar", once again topped the previous film and hit the stride of the series: the greatest Asterix film ever made. From there on, the whole series went downhill. Already from the magnificent opening song "Asterix est la" one can guess this is going to be something special, and so it's hard to understand why some fans are degrading this film every once in a while: besides offering suspense, humor, crystal clear animation and charm, combined with excellent directing from Brizzi brothers, the story also possess something no other Astrix film ever had before: real pathos, real emotions. From the tender, melancholic scene where Obelix meets the blond girl Falbala and falls in love with her the story surprisingly becomes very mature, making a romantic turn and showing the once cheerful hero distracted by love, whereas the enchating score there by Vladimir Cosma is one of the finest pieces of film music of all time. The contrast between the mature, almost adult love couple Falbala/Tragicomix and the caricature, childish friends Asterix/Obelix creates a special spark, while the story works although it's comprised out of two incompatible comics, "Asterix the Legionary" and "Asterix the Gladiator". The only bad thing is the end that dropped that romantic subplot all of a sudden. The sequence where Asterix is trapped in a jail that is flooded by the storm while Obelix is desperately trying to find and save him is the darkest and the most poetic one in the whole Asterix serial, sending shivers down the spine, and the final chariot race shows brilliant example of rhythm and style. A shining little film, and a nice display of the magic of animation.