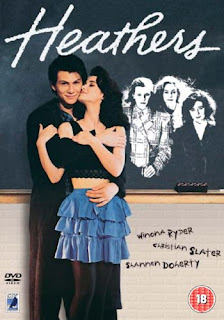 Veronica, an insecure high school girl, is a member of a popular clique composed of three Heather girls: Heather Chandler, Heather Duke and Heather McNamara. After they talk Veronica into writing a false love letter to the overweight Martha, who gets humiliated, she starts despising Heathers. Veronica meets the rebellious J. D. and together they make a drink of drain cleaner, giving it to Heather Chandler. After she drinks it, she falls dead, and they panic and decide to make it look like a suicide. After J. D. kills two more students, mean Kurt and Ram, and makes it also look like a suicide, Veronica decides to break up with him. But J. D. is obsessed with punishing even more arrogant students, so he plants a bomb in the school. Veronica shoots him and stops the explosion.

Cult 80s movie "Heathers" today doesn't look that fascinating anymore. Michael Lehmann's directorial debut announced him as an extravagant, bizarre and "Gothic" director while the screenplay from Daniel Waters subversively tackled themes about class struggle (in this example between the popular and the unpopular high school kids), rebellion and mass obsession with everything, even suicide, and the two of them found support in each other. Winona Ryder is excellent in the leading role and the film is filled with black humor: Heather Chandler asks Heather Duke: "Did you have a brain tumor for breakfast?" High school jocks Kurt and Ram enjoy tipping cows to the ground, but after J. D. shoots them, he places a false suicide note announcing they were gay, even placing mineral water as a definitive proof (because "people in Ohio only drink beer"). Kurt and Ram are later on even placed in their coffins with their Football helmets on. J. D. shows Veronica his middle finger and she shoots it off. The movie is interesting, but not everyone can cope with bizarre and make it look even and skillful: the authors created a grotesque that lost it measure towards the end, turning into an achievement that doesn't know where it's heading or what's it's saying, into an stranded whale. "Heathers" is a good little dark film with an unusual title and story, interesting in it's content if one likes those kind of things.