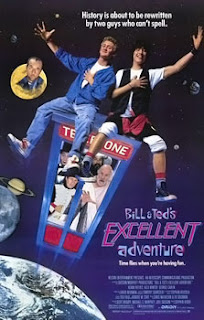 In the future, Earth is a utopia: everything is clean, rock music and harmony rule society because 700 years ago, in 1988, Bill and Ted, two teenagers from San Dimas, changed the world with their music. But, that may never happen, since Bill and Ted's history teacher threatens they will flunk his class if they don't get an A in their oral report, which will jeopardize their band. Thus Rufus appears with his time machine shaped like a phone booth, leaving it to them to learn something about history. They get Napoleon, Billy the Kid, Socrates, Genghis Khan, Sigmund Freud, Joan of Arc, Beethoven and Lincoln to their report, and thus get an A.

Excellent comedy with irresistible jokes, which shows that some teen comedies can hit the right note, was one of the first hits of Keanu Reeves and Alex Winter. "Bill and Ted's Excellent Adventure" is a flick which, if one just looks at it as simple fun, is a cult film that no flaws can be attributed to: it is such a harmless and funny, contagiously alive and energetic entertainment that it can be watched in one piece. One somehow even feels a little bit stupid: this is a film which just shows teenagers Bill and Ted having a great time and nothing more, but nothing more is needed in the spontaneous story if its such a pleasure from start to finish, which shows how smart writing disguised as silly-childish entertainment is a very underestimated issue. Some critics lamented about the film, but just look at the jokes - in one scene at the beginning in the classroom, the strict history teacher is strictly looking into the camera and says: "Well, Bill, I'm waiting". Bill, thinking for a moment, has this outburst: "Is he dead?" The teacher gets an ever stricter look and says: "So, basically, Bill, what you're saying is, that Napoleon was a short, dead dude". Who can seriously resist such hilarious writing? Not to mentions the juicy 'fish-out-of-water' situations where characters from history arrive in the modern world, and thus Beethoven is playing on a synthesizer and Joan of Arc is participating in aerobics, while especially amusing is Napoleon going to the "Waterloo waterslide". Everything is full of ideas: a fantastic, untrammelled fun.