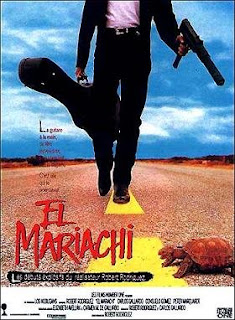 Young musician El Mariachi arrives to a small Mexican town with his guitar case. He tries to find a job as a singer, but nobody wants his services. But, some criminals spot his guitar case and mistake him for assassin Azul, so they start chasing him. El Mariachi hides in the apartment of girl Domina and decides to find the real Azul. Mobster Moco kills Domina and Azul, but El Mariachi kills him.

"El Mariachi" is the legendary directorial debut movie by Robert Rodriguez, shot for only 7.225 $ (though it should be stated that the final version, distributed by Columbia Pictures, was transferred from 16 mm to 35 mm, raising its final budget considerably), which offers excellent unpretentious fun, which is why some regard it as even better than the expensive and "too polished" "Desperado" shot 3 years later. Full of unusual camera angles, humorous ideas (a dog with sunglasses) and fun situations (mobster Moco lights up a match on the beard of his employee; criminals chase after the hero on the street, but don't know how he exactly looks like, so he simply passes by them), "El Mariachi" is a wonderful example of enthusiastic and childish filmmaking, something Rodriguez lost in his later career. The whole film is simple and has a deliberately arbitrarily-sloppy setting, whereas also the amateur actors and unconvincing movie blood contributed to its charm. All in all, to some the story will be too light, yet they will have to admit the fun energy.