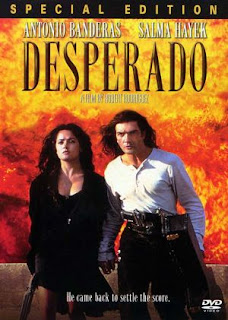 Some man in a bar tells how he witnesses some criminals getting assaulted by the mysterious stranger El Mariachi near the Mexican border. But quickly El Mariachi shows up in that town in person, armed with a guitar case full of weapons, thirsty for revenge because criminal Bucho killed his girlfriend. El Mariachi kills a bunch of people in a bar in self-defense because they thought he will kill him. Since he is wounded, he is nursed by Caroline, the owner of a bookstore who hides money in books and has a relationship with Bucho, who hires a bunch of assassins and puts her home on fire. El Mariachi kills Bucho and runs away with Caroline.

With "Desperado", Robert Rodriguez shot a remake of his own debut movie, "El Mariachi", whose 7 million $ budget made it 1.000 times more expensive than that first film - when at the beginning Steve Buscemi's character starts telling how the hero entered the bar with this twisted dialogue: "Nobody knew what to think about him, but he was there and he came in", it crystallizes the impression that its a matter of an unserious, but excellent fun. The action sequences are masterfully choreographed - something that is massively missing in many mainstream action films - and exaggerated, which is why Banderas is shooting with his guitar case (sometimes even with rockets!) whereas the hit bad guys even fly over 10 yards away. Some will maybe be bugged by the light story and the fact that its just a relaxed fun and nothing more, but it has style, humor, is very good and precise, while Salma Hayek delivered another impressive performance.