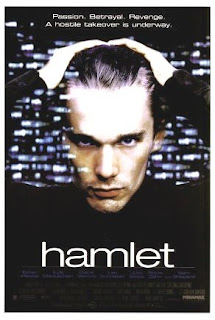 New York. Hamlet, a film student, finds out his father died, while his mother Gertrude suspiciously fast re-married his uncle Claudius. The new couple holds a conference and announces that it is taking over the Denmark company. But Hamlet has a vision of his father's ghost who tells him he was actually murdered. Hamlet is slightly in love with Ophelia, but her father Polonius is trying to prevent their relationship and tells everything to Claudius. Hamlet shots an art video about a man killing his brother, which disturbs Claudius who finds parallels in it. Hamlet kills Polonius and accepts the duel with his son. They both die, but he kills Claudius.

Mihael Almereyda transported his version of William Shakespeare's "Hamlet" into a modern-metaphysical film that stayed absolutely faithful to the original dialogues (the only lines in the movie which are not from the original play are messages played by machines) shot with an inspiring visual style, getting a shrill result. Despite its experimental setting, this is a quality drama, which makes it more surprising that so many critics didn't get it. As a whole, its maybe slightly too artificial and unfinished, with characters that come across as one-dimensional, but the modern transformation has lot of virtues, style and neat ideas: for instance, Hamlet, instead of a ship, travels with a plane and himself watches a movie about Hamlet; while his father's ghost disappears in a Pepsi machine (a symbol of consumerism as an obstacle to real human bonding?). Julia Stiles is good as the modern Ophelia, Bill Murray is even better as her father Polonius who takes her things away so that she listens to him. Also interesting is the sequence where the hero is saying: "...And lose the name of action" when he is talking through the 'action' section of a video store, whereas his art video, comprised out of a shot of a flower, family and mirror shape of the continents is pure genius.