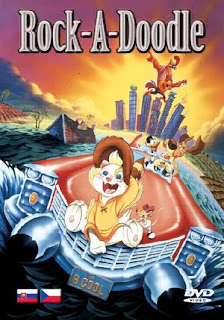 Camera descends from space to Earth, where a rooster called Chanticleer sings every morning to stimulate the Sun to rise. He is appreciated, but when the Sun rises one morning even without his singing, he gets ridiculed and leaves disappointed. Immediately afterwards, rain starts pouring over the farm, so one dog, magpie and a mouse start a search for him. Boy Edmond, taking the form of a cat, joins them, trying to return to his family. They find the rooster has built a singing career in the city and find a girlfriend, Goldie, but returns to the farm. There they get attacked by an evil owl, but when he sings it stops raining while Edmond returns back home.

Simple fable adventure "Rock-a-Doodle" is one of the paler achievements of animated master Don Bluth. Besides an ecstatic physiognomy, the characters are narrowed by unfinished relationships and the too chaotic structure of the story, which will seem bothersome even to children. There's an unusual blend between live action subplot of the boy Edmond and animated main plot revolving around the rooster which leaves rather indifferent. That what is in traces crafted good is the valuable animation which creates a mood for itself as well as some fascinating female heroines, but even the main one, chicken Goldie, appears only some 40 minutes into the film and disappears quickly afterwards. As a whole, its an easily watchable, though blurry and only moderately stimulative patchwork, even despite the fact that the story has some honest imagination.