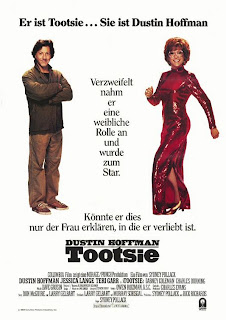 New York. Michael Dorsey is an unemployed actor who had "creative differences" with almost everyone in the entertainment industry. He escorts his friend Sandy to an audition for a TV soap opera about a hospital, but when she doesn't get the role he takes desperate measures and cross-dresses as a woman, Dorothy Michaels - and gets the role himself! In order to gain enough money for a play for his friend Jeff, Michael plays the role of a woman very well, observing the chauvinistic director Ron and eventually falling in love with the actress Julie. When things get to complicated, Michael de-masks himself in front of everyone on a live broadcast.

One of the best comedies of all time, "Tootsie" is a small masterpiece where every potentially questionable or problematic ingredient turned out to be just right in the end. Only true masters could take such an uncertain concept as a man disguising himself as a woman and turn it into a story that seems like the best idea ever: the movie is as hilarious as one light "guilty pleasure" comedy, but as intelligent as an art film— at the same time it is never stiff as an art film, but always elegant and touching as a drama—and at the same time it is never preachy or sappy when becoming deeply, beautifully emotional (the sequence where Dorothy spends the night in Julie's bed, and Julie reflects how she grew up with the wallpaper in this room, always waiting for the flowers on the paper to finally bloom, is a moment of romantic perfection). Nominated for numerous awards, of which it won many, this charmingly brilliant classic operates on a high comic level and belongs in the anthology of the comedy genre: despite numerous gags the story is still dominated by humanity of its characters, whereas Dustin Hoffman as a woman turned out to be a perfect being.

In one scene when Michael, dressed up as Dorothy, auditions for the role in the TV series and makes a fuss when "she" gets refused by the director, a woman producer ask Dorothy if "she" was just acting when "she" said that or if it was natural, upon which Dorothy responds with: "Which answer will get me the job?". The sequence of the final live broadcasting of the TV soap opera, where Dorothy starts completely improvising random lines ("God save us, you do understand, don't you, Dr. Brewster?" - "...I never laid a hand on her" - "Yes, you did. And she was shunned by all you nurses, too!") is absolutely unbelievable and has to be seen to be believed: the screenplay is so meticulously crafted, filled with endlessly quotable lines, that it almost seems as if it was written by B. Wilder. Hoffman simply brings down the house with this role, while at the same time giving a self-referential portrait of the limits of acting, the dimensions of transforming yourself into a different role, equipped with many neat lines ("I can act circles around that guy!", shouts Michael to his agent after he heard that someone else got to play "The Iceman Cometh")—whereas numerous other comic talents all give great little supporting roles, from Bill Murray ("Mrs. Right! Oh, Mrs. Right!", Jeff whispers as Michael observes his dream woman leaving the birthday party) up to the energetic Teri Garr. The jokes and observations about the differences between women and men were never so gentle, poignant and psychologically deep, whereas the whole storyline is crafted with a remarkable finesse and ingenuity that gives it a timeless feel. Even if you hate everyone from the crew on this film, you just have to give them credit for "Tootsie": almost every dialogue is a classic. A shining achievement.