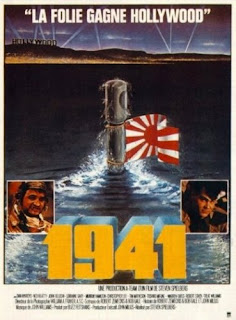 Los Angeles, 1941. A Japanese submarine surfaces off the coast of California in order to attack Hollywood and demoralize Americans, but first they kidnap a local timber merchant. At the same time, Wally intends to take Betty to a dance contest, while captain Will Bill uses his plane to attack the submarine, joined by Sgt Tree and Private Foley. Chaos inflames and not even General Stilwell manages to keep things under control. The Japanese destroy a Ferris Wheel and return home.

Earlier achievement from Steven Spielberg, burlesque comedy "1941" is probably his most primitive and senseless film, but that doesn't mean that's it is entirely bad. In "1941" Spielberg curiously degenerated into (a weaker) Mel Brooks, thus the movie doesn't even seem like a Spielberg film; it's emotionless, wacky, grotesque, unorganized and a bizarre mess, coping simply with more characters than it can handle - the episodic story could have easily disposed of half of the characters in order to gain some cohesive structure. Curiously, in the exposition, Spielberg is parodying his own film "Jaws" when a naked girl is swimming in the sea at night when she is suddenly elevated in the air by a Japanese submarine that surfaces in front of Californian coast, but the thing is rather more silly than it is funny. The film was a commercial failure, but it contains an interesting visual style, the budget of 40 million $ guaranteed an excellent technical look and some jokes are good, like when John Belushi lands with his plane at a gas station in order to fill it up or the finale where Ward goes to hang a Christmas wreath on his door as a symbol of peace and unity, only to accidentally spectacularly push his damaged home into the Pacific Ocean. Sadly, the rest seems forced, never elegant. While Spielberg was serious in his other World War II films, here he tried a different, comic approach, but he doesn't have a sense or rhythm for comedy: brilliant comedians like Dan Aykroyd and John Candy are left underused, the aggressive wild humor seems annoying, the bizarreness doesn't fit (the sequence where General Stilwell watches "Dumbo" in cinemas while a fight rages around him) and the running time is overstretched. "1941" is a sufficient film, but it contains too much caricature and chaos and too little control and sense for measure for such a comedy.