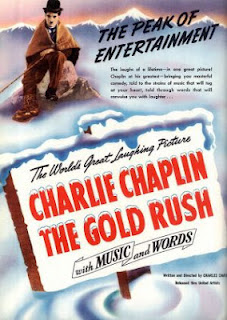 Alaska, 19th Century. Numerous adventurers are searching for gold in the mountains, among them even the Tramp who is surprised by a blizzard. He hides in a nearby barn where he meets the bandit Black Larson. There are soon joined by the clumsy Jim, who also searched for a place to rest. As days go by and the blizzard doesn't defer, the men become hungry and are forced to even eat shoes. Larson gets chosen to go get help, but he vanishes. Finally, the blizzard calms down and they manage to escape. The Tramp comes to a city where he falls in love with a girl called Georgia, although she leaves him alone on New Year's eve. Still, she later begs him to forgive her. Jim and the Tramp return to the barn and find gold, thus becoming rich.

Excellent silent comedy "The Gold Rush" is one of the most respected in Chaplin's opus, who once again proves that he can, besides gags, also create a very clever movie maker style even for feature length films, unlike his colleagues Laurel and Hardy whose films over 20 minutes become used out and run out of steam. The jokes served somewhere around the middle of the film, which play out in the city, are unfunny and slightly forced, but the ones in the barn are hilarious: the timeless genius of the "old" films can be best sensed in the classic scene where the Tramp eats his shoe or does the "dance" with two bread rolls. Another great, but more "unknown" gag involves the scene where Larson tries to throw the Tramp out of the barn, but the blizzard wind is so powerful that he can't even come close to the opened doors, and in another the barn gets dragged all the way to the edge of the cliff, thus tipping for 90 degrees while the men are still in it, whose perspective gets distorted, so the Tramp and Jim are forced to slowly crawl on the floor towards the exit before it crashes. The emotions are rather underplayed in the story this time around, but even the "colder" romantic subplot ends up being very good, making "The Gold Rush" a simple classic gold.