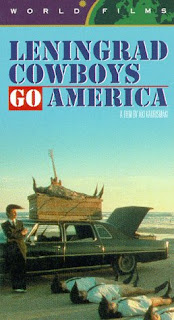 Russia, somewhere in nowhere's land. The Leningrad Cowboys, a group of bad musicians with bizarre hairdos, is led by manager Vladimir who can never find someone to hire them. So they decide to go to America to try their luck there. After arriving in New York, a contractor offers them to play at his cousin's wedding in a Mexican town, so they take a road trip in a car through the US, carrying a frozen band member in a coffin. They are pursued by the village idiot Igor and exploited by their manager, so they rebel and tie him up. Along their way they sing in local bars and eventually become famous on Mexican territory.

Aki Kaurismäki's most popular film, an attempt to connect a minimalistic story with mainstream popularity, "Leningrad Cowboys Go America" seems like some sort of a Finnish version of Beatles' "A Hard Day's Night", a simple low-key parody where everything is exaggerated, and even Jim Jarmusch - the director's American "twin" - is playing a small role as a car salesman. The band Leningrad Cowboys - which eventually really came to life after the film - is simply very sympathetic and unusual, from their giant Elvis-like hairdos that are a foot long up to their pointy, giant shoes, and their interaction with the foreign environment is the main source of the film's charm. The gags are mostly simple and accessible: in one scene, Vladimir, the manager, is talking with the father of Leningrad cowboys who says that his great great grandfather went to USA a long time ago and he never heard of him again, and then they both look up to his picture, revealing actually a picture of Abraham Lincoln just with the same giant hairdo. In another scene, even the dog of the Leningrad Cowboys has that specific hairdo. In another, a Leningrad Cowboy member has to pin up his pointy shoes in order to drive the car normally. Extremely stylish and extremely loose and spontaneous, "Leningrad Cowboys" are in the end too overstretched for comfort, and it is a pity that the plot is too thin, dry and without a clear sense where it is going, but the charming actors and the amusing interpretations of such songs like "Born to be Wild" are enough for a recommendation.