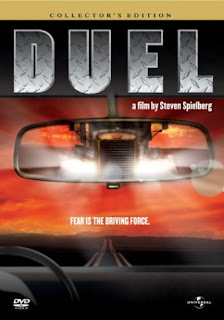 David Mann is a businessman driving in a car on a highway heading to a business appointment somewhere in the Californian desert. On his way he passes a seemingly harmless large tuck and stops at a local gas station. When he returns to the road, the truck catches up to him and without a reason starts to chase him. David lands from the road and stops at a local restaurant in order to eat and let the mad truck driver pass. But once back on the road, David notices that the said truck driver waited for him and again started to chase and terrorize him. In the end, David slams his car at the truck, which falls from a cliff.

"Duel", Steven Spielberg's feature length film, is a meticulously made psychological mystery that pulled the absolute maximum out of the banal story and placed it to shine in full glory. This minimalistic thriller revolves around driver David who is, without a reason, being chased and terrorized by a truck that is controlled by a driver whose face is never shown, but in this version the movie as a whole seems fascinating, intriguing, raw and allegorical - the truck is the symbol for the unresolved problems from which it cannot be escaped, but which have to be resolved; or for the inexplicable persecution of one group of another - and some flaws like the too short running time, compact story or David's inner monologues, are minimal. Spielberg is here actually presented in a different light, as a tight thriller director who creates a "chamber play" out of only two characters, and whose dark style not even Hitchcock would have been ashamed of. Even the simplest sequences, like where David is trying to escape from the truck by speeding up the road on the hill or where the truck driver is waiting for him when he stayed behind in a restaurant, seem fluid and relevant. To make something out of nothing is real art, and exactly that is "Duel".