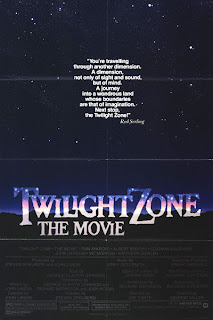 Two men are driving in a car at night. Suddenly, one of them decides to show the other something scary by transforming into a Zombie and killing him, while the narrator says that we are entering the "Twilight Zone": William, a man who lost a promotion because of a Jew and whose neighbors are Black, starts making racist comments. Just as he is about to leave the pub, he is suddenly caught by Nazis who claim he is a Jew and send him into a concentration camp...In a retirement home a mysterious Mr Bloom transforms old people into children. But they all become old again because they want it that way...Helen meets a boy and gives him a ride home. He shows her his house, where people are imprisoned since he has special telekinetic powers and can do whatever he wants to. She takes him with his car...John spots a gremlin on the plane's wing, but nobody believes him. When the plane lands, he is sent to a mental institution.

Since the four popular directors - Landis, Spielberg, Dante, Miller - put their signature on the "Twilight Zone: The Movie", an adaptation of the also popular horror TV show that aired in the '50s and the '60s, the expectations were big, but except for a solid commercial success the movie is rather disappointing. It's a lethargic omnibus consisting of 4 stories, from which the first two are not even suspenseful, or even good. In the bizarre, almost inadvertently comical prologue, Albert Brooks is driving Dan Aykroyd who suddenly asks him: "Do you want to see something really scary?", before he turns his head away only to transform into a Zombie, after which the narrator announces that we are entering the "Twilight Zone". The first part of the film, in which an antisemitic man is by some strange twist of fate found persecuted by the Nazis is in theory an inventive take of "tasting your own medicine", but the realization is inert and weak, and a lot of things have been left underdeveloped. Spielberg's second story is actually a sappy drama in which old people become young again: instead of at least putting some skill and wit into the plot, he decided to simply direct it in a tame way and the result is a thin soap opera with only one interesting detail - the scene where old people are being instructed how they can have a healthy sexual life even after they have passed their 70s.

After the first two disappointing segments, Dante managed to bring some sharpness into the film with his 3rd story about a boy who can do anything with his mental super powers, offering a creative horror scenario (in one scene, he creates a giant monster rabbit that comes out of the hat) and a poetic end (the boy and Helen are leaving in the car while the desert is transforming into a meadow behind them), but the thing is a tiny bit too crazy, chopped up and tame in this version, stopping just at being only good. The forth and final segment, directed by Miller, is by far the best: John Lithgow spots a gremlin on the wing of the plane, but nobody believes him. The story is a real nightmare and directed with taste and delicacy, slowly bringing the paranoia of the character to the extreme: it's an excellent segment, but he can't bring that quality to the rest of the three that didn't adapt to the tone of the show.