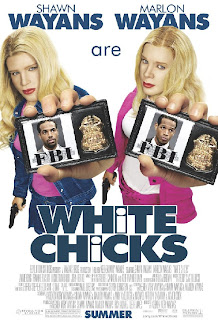 Two FBI African American agents, Kevin and Marcus, masters of disguise, get a new assignment: they have to pick up Brittany and Tiffany Wilson, the blond daughters of a rich tycoon, at the airport in order to protect them from being kidnapped. When the two sisters get a small scar after a car accident and refuse to leave the hotel, Kevin and Marcus disguise themselves as the Wilson sisters. No even Tori, Karen and Lisa, their best friends, or their worst enemies, the Vandergeld sisters, notice any difference. Kevin and Marcus manage to stop the kidnapping and discover the father of the Vandergeld sisters was planing to eliminate them.

It wasn't hard to guess that "White Chicks", another Wayans brothers comedy, would be another populist comedy, a stupid, thin, shallow and forced crowd pleaser aimed only to quickly satisfy the norms of light entertainment, but the film was still nontheless funny at parts and managed to stay in borders of vulgarity and bad taste. For instance, in the opening act Shawn and Marlon Wayans are masked as two Mexican clerks who are expecting a drug delivery in order to arrest smugglers at their store: the way those masks of baldy Mexicans with heavy moustaches look like, and the way they are delivering their lines looks almost as a Cheech and Chong parody and is hilarious. Sadly, the rest of the film is rather forced and predictable: it's never convincing that they look like white blond girls, from the weak make up Shawn and Marlon wear up to the fact that they always wear long sleeves to hide their strong arms. Maybe it was a part of the joke to let them look unrealistic, but it didn't come across very well. The story manages to nail a few true female cliches, like the maniacal obsession with their own looks, and explore a few male-female relationships, but they were all already handled years ago in much better comedies like "Tootsie" and "Victor/Victoria". If anything, the average plot is sufficient for a very good dance choreography sequence somewhere near the end and a few cynical jokes, like the one where a Vandergeld sister is shown in a TV commercial for vaginal herpes while a jealous Karen comments: "How did she get that role? She doesn't even have herpes!", but 4 out of 5 jokes fail to work and only emphasize how good those jewels of transgender comedies like "Tootsie" really were.