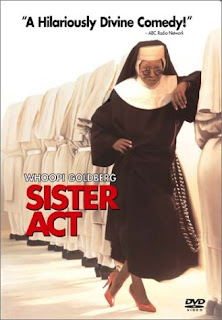 Ever since she was a little girl, Deloris Van Cartier wasn't in best relations with nuns. As a grown woman, Deloris became a lounge singer in Nevada, but without any big success. Also, she is unaware that her lover Vince is a mobster. Just as she wanted to break up with him since he was already married, she accidentally saw him killing a police mole. In fear she ran away and asked for police to protect her. The witness protection program disguises her as a nun and places her in a Catholic convent, and gives her a new name, Sister Mary Clarence. At first she doesn't like it there, but when she enters the choir she manages to attract people to the empty church with great songs. Vince eventually finds and kidnaps her, but police and the other nuns save her. In the end, she organizes songs in the choir for the visit of the pope.

After a mass of modern comedies that are full of vulgarity, malignity, violence and intercourse references, it's actually rather refreshing to find one that's simply innocent and "clean" as "Sister Act", even though it isn't especially well made. "Sister Act" is a solid film, accessible, simple and moderately amusing story with a few funny dialogues (in one scene a biker says "This turns into a nun's bar, I'm outta here") of the so called "Fish out of water" concept that even has a few spiritual messages, but all in all it contains a lot of flaws and doesn't manage to use all possibilities of the story fully, so it's a little bit strange that the film was nominated for a Golden Globe for best picture musical or comedy. But Whoopi Goldberg was nominated rightfully for that award since she elevates the thin story the most, for instance in scenes where she and the other nuns go to town and repel people from entering into "suspicious" bars or when she is conducting the choir into singing a beautiful song "I Will Follow Him" during the visit of the pope, thus even slightly indicating how the church's members should change their rules a little bit and go into the world to interact with the people, instead of just being in the convent.