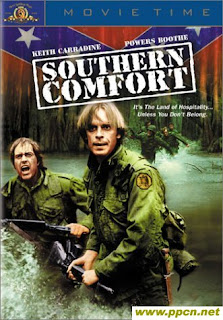 Louisiana. A National Guard patrol of 9 people go to a routine military excersise during the weekend on the south. In order to cross a swamp, they take canoes of local Cajun's. When Cajun's show up on the shore, soldier Stunkey mischivosly shoots at them with blanks, on which they return fire and kill Seargent Poole. The patrol is in chaos and Seargent Casper takes over the leadership. They find a local Cajun hunter and arrest them although they are not sure if he shot at them, while Bowden blows up his house. That makes the Cajun anrgy and they start hunting and killing patrol soldiers one after another. In the end, only Hardin and Spencer manage to escape from the forest and come to a local village. There the hunters find them and attack them, but they manage to kill them while the US military finds them.

"Southern Comfort" is a very interesting film from the unknown, straight-forward director Walter Hill that comes as some sort of an allegory to the Vietnam War. In the opening shots of the military gathering, the movie is chaotic, disjointed and the dialogues monotone, but once the tangle starts, where the Cajun are provoked and start hunting the 9 soldiers in the swampy forest, it transforms into an intriguing and suspenseful thriller about misunderstanding, arrogance and the ever lasting human resort to violence. The story borrows from Boorman's "Deliverance" but also offers a lot of original details: when one of the soldiers finds a dead deer, shot by the Cajun hunters, he says: "Somebody shot Rudolph!" When the enemies start hunting the soldiers, their faces are never shown (until the very end), giving the film ambiguity and paranoia, especially when sometimes those soldiers become their own biggest enemy. They let their dogs attack the soldiers, or even cut off trees and let them fall on them! It's a quality action drama, but a one-note story that was a little bit overstretched and chaotic, and it's not obvious that Hardin and Spencer are the main protagonists until the very end when they end up being the only characters alive. Still, it's a realistic, grim achievement with elegant direction and fluid rhythm.