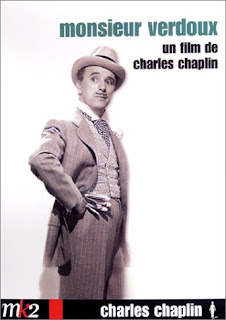 One family is wondering where their aunt Thelma disappeared off. But she is already dead - she was killed by Henri Verdoux, a gentleman turned into a serial killer who married older women in order to eliminate them and get their money. After Thelma his next victim is Lydia. But he is only doing that to finance his real wife in a wheelchair and his child since he lost his job. Among his "false" wives is also Annabelle who is constantly talking and refusing to leave her fortune to him. One day Verdoux gives some money to a poor girl and realizes there are also beutiful things in life. But he gets arrested and sentenced to death.

After his last great film, the brilliant "The Great Dictator", Chaplin somehow lost his strength in the sound movie era and started making unnoticed achievements. "Monsieur Verdoux" is for him a untypically cynical and black comedy that ridicules (but secretly also praises) humanism, causing the film to be a commercial failure but also to get nominated for an Oscar for best screenplay. Truly, "Verdoux" starts with elegance and clever humor: in the opening shots Verdoux's grave is shown, but then his voice in form of a narrator starts telling his story. In the next shot the protagonists are members of a average family who are wondering where their aunt Thelma disappeared after she got married for a suspicious husband ("Maybe they are still on the honeymoon!" - "Who could hold out that for 3 months with Thelma?"). Then Verdoux is shown in his garden how he is burning Thelma's corpse in an oven. Chaplin still has style, but the movie is forced and too bizarre at parts, trying to soften his evil role he is playing, an the pathetic can be noticed.