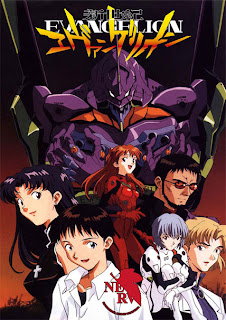 Tokyo 3, 2015. A bird is resting on a tank. Suddenly, a mysterious 100 feet tall robotic monster shows up, called 'The Angel', against which all human weapons are powerless. At the same time, the shy 14-year old Shinji is picked up by Commander Misato and brought to the NERV headquarters - headed by his elusive father Gendo - to pilot a similar giant robot, Eve 1. Reluctantly, he agrees and wins in the fight against the Angel. He settles in Misato's apartment and 14-year old girls, German Asuka and Rei, are also summoned to pilot Evas and fight against the Angels. It is eventually discovered that scientists discovered the first Angel, Adam, on the South Pole 15 years ago that triggered a huge explosion that wiped out half of humanity, known as 'Second Impact'. Yet Adam's body was used to assemble Eva. At the end, Gendo starts the Instrumentality project that would advance the human kind and bring it to a new level of existence. In that dream state, Shinji finally grows up without fear of life.

A shining anime, the most popular Japanese animated show of the 90s, "Neon Genesis Evangelion" is one of the heaviest examples of deep genius in that genre, a series that rightfully enjoys the reputation of one of the most imaginative pieces of anime of that decade, even though it's story is at times so hermetic, multi-layered and symbolical that it can fly right over some viewers heads. Though it's based on the standard 'mecha genre' - aka kids piloting giant robots - it audaciously mixes Judeo-Christian mythology and psychology in something never seen before that, yet some of the crucial things needed for the explanation of the story were never spelled out. As a consequence, many have difficulties understanding it: but whether the Angels represent a race born out of the "Tree of Life" which makes them invincible for the human weapons, and humans a race born out of Lillith and "Tree of Knowledge" which is why they are weak but have technology, or not, whether the Human Instrumentality Project actually represents eugenics that would remove all the bad things from life and make humans the more dominant race in the Universe than Angels or not, whether Angels and humans were created by God or not, the story is actually not about them, but about something on a far more smaller scale, an intimate 'coming-of-age' story about the adolescence of the 14-year old Shinji and his acceptance of his life and the role in the world. Looking at it that way, and having in mind that Eva could be Id, Shinji super-ego and both ego, than this becomes a psychological character study and an unlikely masterpiece.

And that was very clever from Anno who lured audience into this anime by making at the beginning a sci-fi action comedy, but then slowly turning it into an existential drama. The first 10 episodes were quite funny; we learned how Shinji was ashamed when Misato picked him up in her car wearing a short skirt. Then, after she heard that he must stay alone in some sort of a motel, she talked him into staying at her place. Sharing an apartment with her made Shinji even more embarrassed when he saw a dozen of her bra's hanging in the bathroom. And when he met Misato's penguin, Pen-Pen, he ran out of the bathroom naked (an amusing scene in which his intimate part is cowered by a can of Misato's beer). Shinji has almost no friends in school and feels worthless in this world. He thinks that every person around him is more important than him and that's why he is often passive. That's why the Angels have no other function than to be a symbol of Shinji's combat with low self-esteem. Because they represent a problem only he can solve, which is why suddenly the world needs him. That's why the more of Angels he beats, the more self confidence he gets.

"Evangelion" is nothing more than a symbolic drama about growing up. That's why the appearance of "Angels" is almost like a Divine intervention in his life (loosely based on Enoch's apocryphal scripts), making him - important, the only person on Earth that can save human kind. For the first time in his life, Shinji realized that he is worthy of living in the society. Anno once said he put everything he knows about life into this story and that is really visible. Almost every scene, no matter if its epic (giant chalked outlines of "Angels" on the "scene of the crime" that cower the whole hill), dramatic (the episode where Shinji and Rei defeat Angel Ramiel, shaped like a giant Octahedron, firing a laser beam that consumes the whole energy source of Japan, is bravura directed) or humorous (Toji accidentally looks under Asuka's skirt and she slaps him. He asks why, she says because of a pervert tax. He puts his pants down in front of her and she slaps him again) are brilliant. And the ending is genius, simply genius: by replacing the whole real world with a dream state where Shinji is at one point even drawn just by black lines in front of a white background, floating in a universe without rules and boundaries, it expands the frontiers of our mind by showing how problems that burden the human kind can be "restructured" in a world without them, a world where the human mind molds the rules, not vice-verca. In the end, "Evangelion" is not the Gospel of religion, but a new Gospel of normal, everyday life and self-improvement.

Eva is quite possibly my favorite anime. It left such an impact on me that no other anime (or movie for that matter) ever has. That said, I will admit from an objective view, it's a bit of a mess in some places. Don't get me wrong, I'd still give it a 10 but it's got it's rough spots.

Agreed, it had some loose ends, but the overall impact blew my mind.