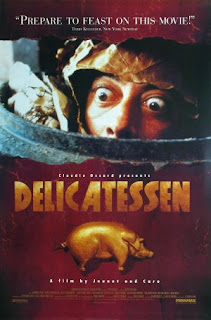 A devastated world after some apocalypse. There is a shortage of food so an egoistical butcher is feeding the inhabitants with human meat, mostly assistants in his butcher's shop. The new "assistant" who searches for a job is Louison who is rather thin. He meets strange tenants in his building: Aurora, who unsuccessfully tries to commit suicide; a father of two children; a man whose mother in law is killed by the butcher because she passed her age limit...In order to save Louison, Julie, the butcher's daughter, hires a secret group to save him from the building. The butcher throws a boomerang-knife at Louison, but it flies back killing him instead.

"Delicatessen" gained global cult status after it's premiere. Unjustifiably. Fans of the genius director Jean-Pierre Jeunet will conclude with shock that his smashing visual style is in this film - practically absent. Everything is shot with normal, conventional camera angles so the caricature story with a forced sense of humor works only moderately well. "Amelie" and "The City of Lost Children", Jeunet's later films, contained 4 times more visual style than here. Still, looking at other aspects of this feature length debut film, "Delicatessen" have enough virtues on their own to stand out from the usual French cinema, mostly thanks to their solid ideas: the protagonist Louison takes a cigarette and puts smoke into the a bubble of soap. The postman breaks the glass by spitting on a framed photo. And the Aurora part is a small jewel: she wants to be absolutely sure that she will commit suicide so she places a gun, a hanging rope, deadly pills with a glass of water and gas with a smudge mop...But just then it all comes out beautifully different, namely the gun hits the rope so she falls and accidentally extinguishes the fire with the spilled water. It was nominated for a BAFTA as best foreign language film.