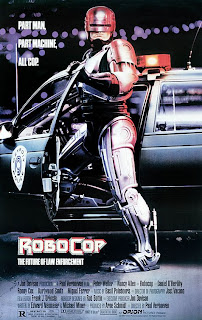 Detroit in the future. Criminal Clarence shoots and kills cop Murphy in an abandoned factory, so his corpse gets transported to a lab run by OCP, a megacorporation that recently bought the police department, and transforms him into half-man half-robot: RoboCop. OCP lets RoboCop out in the city to fight crime and have great success, all in order to fire a bunch of police officers and replace them with the cyborg who is much more profitable. But the greedy OCP Vice President Richard Jones doesn't want RoboCop - having his own robot model in mind, ED-209 - and orders his friend Clarence to eliminate him. Still, RoboCop kills Clarence and his gang and exposes Jones' evil plans in front of his superiors in OCP.

"RoboCop" is one of the most attractive and famous movies from the golden 80s that attracted great attention and indulged the human fascination with high-tech future. It is the 2nd American cult movie by Dutch director Paul Verhoeven who envisaged the exotic design of the cyborg hero inspired by Lang's "Metropolis", but despite the audiences expecting the least, they got the best: instead of a B movie, they got an independent film. Instead of trash, they got (subversive) art. The screenwrtiers added a slick, bitter critique of Darwinian Capitalism in the future where corporations' urge for profit resulted in them buying every public sector and controlling every part of life, obvious in the cynical sequence near the start where OCP's Vice President Richard announces on the conference how their company "bought many sectors that seemed unprofitable, like hospitals, space exploration, and managed to make them profitable". Many 80s references are brilliant - like the TV news segment, realized with black humor, where the anchors announce how a satellite accidentally fired lasers to Earth, among whose victims were also two former US presidents who were taking a vacation in Santa Barbara: it is clearly a satirical jab at Reagan's "Star Wars" program. Unlike other "superhero" movies, "RoboCop" offers a twist to the genre: once Murphy gains a new secret identity, it is permanent, and he cannot turn back to his normal, human self.

And it is cleverly conceptualized - for instance, in one scene near the end, RoboCop cannot shoot the evil OCP Vice President Richard because his programing forbids him to harm any OCP employee, but then the old man fires Richard, thus "eliminating" the order (on the screen) and RoboCop can then proceed to shoot the now ex-OCP Vice President - whereas the crab-ostrich like robot ED 209, placed in scene with stop motion animation, is truly fascinating, culminating in a highlight where he trips and falls down the stairs, ironically demonstrating how robots, despite their power, still do not have that basic human intuition. Some moments in the story were executed shaky (the lack of interaction between Murphy and Lewis; the unfinished subplot revolving around Murphy's family...) and the violence is at times so vile that it actually numbes the dark story, yet it is secretly humane, nonetheless: namely, the basic premise is that Murphy was a normal cop until he was shot by Clarence and brought back to life as a different creature, a cyborg called RoboCop. But RoboCop is not a human anymore, he is a product, a tool for the OCP that made him cold, mechanical and obedient to suit their interest to cheaply fight crime and erase any kind of individualism out of him. This mirrors the tendency of new Capitalism in which an employee is reduced to a number. This time Murphy, as RoboCop, can bring Clarence to justice, but even though it is against his programming, he starts feeling real emotions inside once again. The message is that despite oppression, brainwashing and absolute control, nobody can erase a person's personality since there is some human spirit that will always define the way someone is, which is precisely why this film secretly sparkles by giving hope at the end of a dark tunnel.